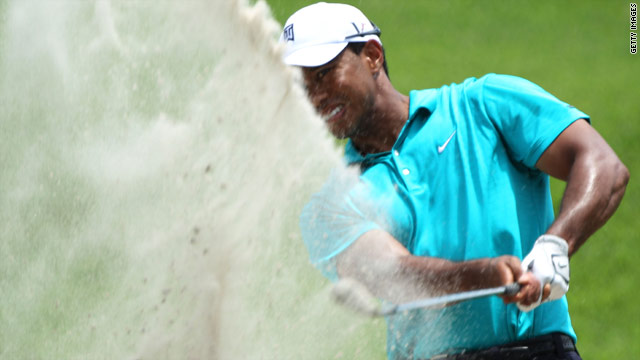 Tiger Woods plays out of a bunker on the ninth hole during his second round at Sawgrass on Friday.
STORY HIGHLIGHTS

(CNN) -- Tiger Woods has avoided missing the halfway cut in successive tournaments for the first time in his career, but will go into the weekend at the $9.5 million Players Championship nine shots off the lead.

The American, playing only his third tournament since the scandal broke about his admitted marital infidelities six months ago, carded one-under-par 71 in his second round on Friday to leave himself safely inside the dreaded cut on another hot day at Ponte Vedra Beach in Florida.

"I wasn't quite as sharp today as yesterday," Woods told reporters. "I was just kind of outside that birdie-able range with my iron shots.

"I felt like I putted better, but unfortunately I was just a little bit too far away from the holes."

Hopefully this course will toughen up a little bit. You'd think the greens would be a little more springy.
--Tiger Woods
RELATED TOPICS

Starting on the back nine at Sawgrass, the world No. 1 bounced back from dropping a shot at his second hole by firing two birdies -- but then suffered a double-bogey after a wild drive ended in a water hazard on the adjacent 12th.

He immediately responded with a fine approach to 15 that gave him a five-foot birdie putt, and then reached the par-five 16th in two and two-putted from 40 feet to pick up another stroke.

An errant drive into the bunker saw him start his second nine with another bogey, but he immediately earned it back at the following par-five with an up-and-down from the rough after his second shot flew over the green.

"Hopefully this course will toughen up a little bit," Woods said. "We're holding 5-irons and shots on No. 8 with 3-irons are holding. You'd think the greens would be a little more springy."

Woods admitted he was still behind in some facets of his game, such as hitting a draw shot -- his double at 12 was caused when he tried to stop his swing as the club was in the wrong position.

But while the 34-year-old was left nine strokes adrift of Englishman Lee Westwood, who soared to the top of the leaderboard with a 65, Woods can take some solace in that his rival for the top ranking was also off the pace.

Phil Mickelson can move to the summit if he wins and Woods finishes outside the top five, but the Masters champion was also on three-under after himself shooting 71.

The left-hander parred his first nine holes before a birdie at 10 was immediately offset by a bogey, but went under again as he picked up a shot at the par-five 16th.

Westwood, seeking his second PGA Tour victory, claimed a one-shot lead as he fired an eagle and six birdies, including one at the notoriously difficult island par-three 17th.

Italy's Francesco Molinari matched his 65, a flawless effort featuring seven birdies, to be tied for second on 133 with Japan's Ryuji Imada and American Heath Slocum, who both shot 66.

American Lucas Glover also eagled 16 as he was another to score 65, putting the U.S. Open champion three shots behind Westwood.

Meanwhile, Sweden's Fredrik Andersson Hed claimed a one-shot lead at the halfway stage of the European Tour's Italian Open after carding a six-under 66 on Friday.

He was chased by a group of five players on 137 including Spanish veteran Miguel Angel Jimenez.

Former amateur star Matteo Manassero was four shots off the lead in his professional debut, with the 17-year-old Italian tied for 10th after a second successive 70.