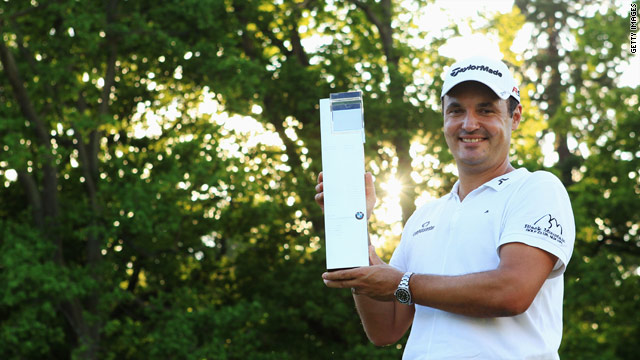 Simon Khan proudly displays his European PGA trophy after carding a final round 66 to snatch the title by one shot.
STORY HIGHLIGHTS
RELATED TOPICS

(CNN) -- Englishman Simon Khan carded a final round five-under-par 66 to claim an unlikely one-shot victory in the European PGA tournament at Wentworth.

Although only ranked 471st in the world, Khan does have a good record around Wentworth and finished second to David Howell in the same tournament in 2006.

"This win is as much for my family as it is for me -- it's unbelievable to be standing here right now," Khan told the official European Tour Web site.

"This means everything. This tournament is the reason I started playing golf and just being here is special this year."

Khan, who had to rely on a sponsor's invitation to play in the event, adds the title to the Wales Open he won back in 2004.

World number three Lee Westwood carded a final round 66 to finish joint 11th, while first round leader Danny Willett managed to hang onto fifth place despite a final round 74.