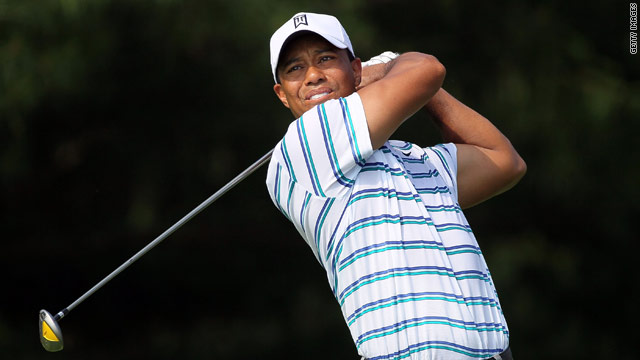 Woods drives off during his second round at the Memorial on Friday.
STORY HIGHLIGHTS

(CNN) -- Tiger Woods left himself in position for a weekend charge after a second round three-under 69 saw him easily make the halfway cut at the Memorial tournament in Ohio.

The world number one scrambled to a level-par 72 in his opening round as he returned to PGA Tour action after a neck injury, but showed improved form as he went out early on Friday.

A last-hole bogey took the gloss off his performance but on three-under 141, the world number one was happier with his play after reeling off three straight birdies on his back nine.

"I hit more good shots today than I did yesterday and really putted well today. I had five lip outs today, so it could have been a pretty good number."

But Woods is still 10 shots off the blistering halfway pace set by another early starter, Rickie Fowler, who is playing in the prestigious Jack Nicklaus-hosted event for the first time.

"You know, we all know he's got the talent to do it. It's just a matter of him doing it."

Fowler matches the record set by Scott Hoch in 1987, but will be hoping to do better in the final analysis.

Hoch eventually wound up tied third despite his superb start, but Fowler is just happy to be in the mix.

"Just being in contention the few times I have over the last eight months or so since I turned pro, this is by far the best that I've felt. Game feels good. Putter's working a bit. So we're having some fun."

Meanwhile, Woods is hoping to hone his game over the weekend as he builds up to the U.S. Open at Pebble Beach, having played just 12 rounds on the PGA Tour this season after his self-imposed exile.

"Here we are in June, and I'm at the point which most guys are beginning of the year. So it's just one of those things where the more times, the more good shots I hit, keep building, and it's a process," he added.

Woods' arch-rival Phil Mickelson can take over as world number one if he wins at Muirfield Village on Sunday, the world number two making a fine start with a five-under 67.

In the Welsh Open on the PGA Tour, former British Open champion Paul Lawrie ran up a nightmare 11 on the 10th hole at Celtic Manor, which will stage the Ryder Cup later this year.

Lawrie had moved into contention until he found a greenside bunker and made a hash of his recovery.

But the worse was still to come as he ran into a hollow and needed three putts to get the ball back up onto the level of the green in which the hole was situated.

Incredibly, Lawrie then putted back into the hollow and by the time he had holed out had used eight putts.