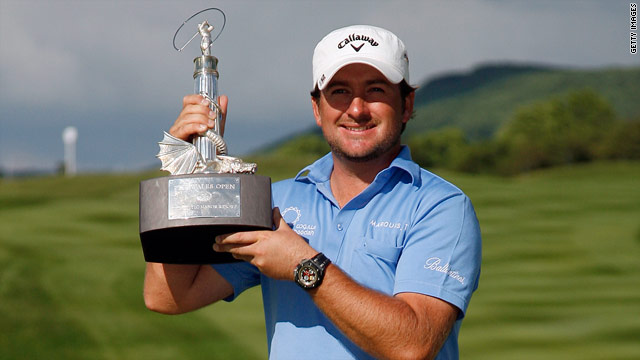 Graeme McDowell did his Ryder Cup chances the world of good by winning the Wales Open at Celtic Manor.
STORY HIGHLIGHTS

(CNN) -- Northern Ireland's Graeme McDowell shot a final round 63 to seal victory at the Wales Open and boost his bid to make Europe's Ryder Cup team.

McDowell only just made the cut on Friday on level par but produced two blistering rounds to reach 15-under-par, and see off the title bid of local challenger Rhys Davies, who shot a course record 62.

The 30-year-old finished three shots clear of Welshman Davies on the course that will stage the battle between Europe and America in September.

Englishman Luke Donald finished two behind Davies to finish in third, but he was left trailing by McDowell who recorded his first tournament win since the Scottish Open in 2008.

I feel like I'm in the form of my life right now and I really feel I have a big event in me.
--Graeme McDowell
RELATED TOPICS

McDowell's victory took him to within touching distance of the Ryder Cup qualification places and he admitted he was delighted with his form.

"I think it's the best final round I've ever played to win a tournament," McDowell told the European Tour's official Web site. "The first 11 holes was dream golf and I am ecstatic.

"I feel like I'm in the form of my life right now and I really feel I have a big event in me. To win around here is certainly going to stand me in good stead."

McDowell started the final round four shots back but six birdies in the opening eight holes saw him storm into the lead.

Back-to-back birdies on the 11th and 12th pushed him further in front and a run of seven successive pars was enough to secure the title.

Overnight leader Marcel Siem's challenge ended when the German found the water twice on the par three third hole to record a quadruple-bogey.