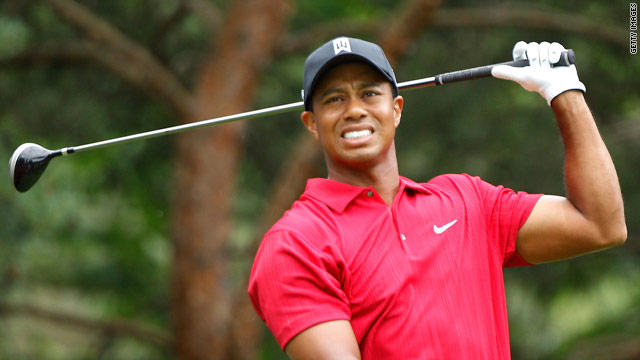 Tiger Woods gave away three signed gloves to members of the public gallery that he hit with wayward shots at Muirfield Village.
STORY HIGHLIGHTS

(CNN) -- Tiger Woods was forced to apologize to three members of the public gallery at the Muirfield Village course after hitting them with errant shots.

The world number one handed each person a signed glove by way of apology as he battles to recapture his best form.

Woods finished on six-under in the Memorial Tournament, 12 shots behind winner Justin Rose, from England, who shot a final round 66 bagged his first ever win in the United States.

After his final round Woods was asked in a press conference if he was running low on gloves. He replied: "No kidding, huh. I kept getting everybody out there today. No, but thank God I get them [gloves] for free."

He admitted his form is still patchy but that he was heading in the right direction: "I have to take it step by step. It's a process. I hit shots this week I hadn't hit in a long time and got four rounds in.

I hit shots this week I hadn't hit in a long time and got four rounds in.
--Tiger Woods
RELATED TOPICS

"Short game, chipping was streaky, I'd have to say. I hit some really sweet shots and hit some really bad ones. Just needs a little bit of work. But I really putted well this week, which is good. I had good speed."

Woods comfirmed he wouldn't be participating in next week's St Jude Classic in Memphis, as he focuses his preparation on the U.S. Open which starts at Pebble Beach in California on June 17.

Woods finished tied for 19th place -- some way off 29-year-old Rose who was ecstatic after securing his first win in the U.S after years of trying.

"I've had a few close calls over time, and you start to sometimes wonder why you can't get it done," Rose said.

"To win here at the Memorial, at Jack's tournament, I couldn't think of a better place to win my first tournament."