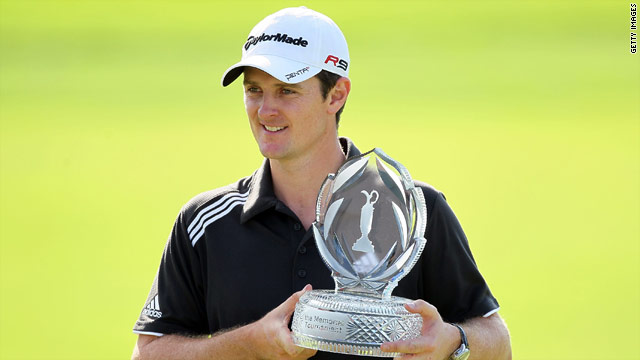 Rose picked up his first U.S. PGA Tour title at the Memorial in Ohio on Sunday.
STORY HIGHLIGHTS
RELATED TOPICS

(CNN) -- Justin Rose and Rickie Fowler both failed to qualify for next week's U.S. Open, one day after finishing first and second in the PGA Tour's Memorial tournament.

England's Rose and U.S. rookie Fowler both failed to finish in the top 15 in a 36-hole qualifying event in Ohio.

Rose, 29, finished tied for 31st on four under par, while Fowler had a 73 in the afternoon to miss out by six shots.

"Being in contention definitely wears you out quite a bit, and this is my third week in a row playing," Fowler told the official PGA Tour Web site.

"So I'm looking forward to some time off. It would have been nice to be playing in the Open, but it happens."

Rose came from four shots behind to win the Memorial at Muirfield Village, Ohio, on Sunday after Fowler had held the lead for 48 consecutive holes.

Major champions Tom Lehman, Davis Love III and Ben Curtis all qualified for the 110th US Open at Pebble Beach, Florida, from June 17-20, along with Brian Davis of England and Stuart Appleby of Australia.

"I've really been hitting the ball well and, like today, I made four bogeys and missed a bunch of easy birdie putts. It would have been a shame, the way I'm hitting it, not to get in."

One man who will not be appearing at Pebble Beach is Dallas Cowboys quarterback Tony Romo, who was forced to withdraw when bad weather in Houston pushed the conclusion of qualifying back to Tuesday.

Romo's NFL commitments prevented him from staying on for the extra day.

Meanwhile, European Ryder Cup captain Colin Montgomerie made five birdies in the last seven holes to qualify for the 2010 British Open at St Andrews with a course-record equalling 62 at Sunningdale New.

The Scot's stunning round ensured he will extend his run of Open starts to 21 at the so-called Home of Golf, where he finished runner-up to Tiger Woods five years ago.

"This will probably be my last opportunity to play The Open at St Andrews," Montgomerie told the U.K. Press Association.

"I'm just glad the opportunity has been taken. "It's a special place no question and of course I'll draw on last time.

"You finish second to the best player that's ever played the game and you go with a bit of confidence. It's home, I've got good support and I'm looking forward to it."