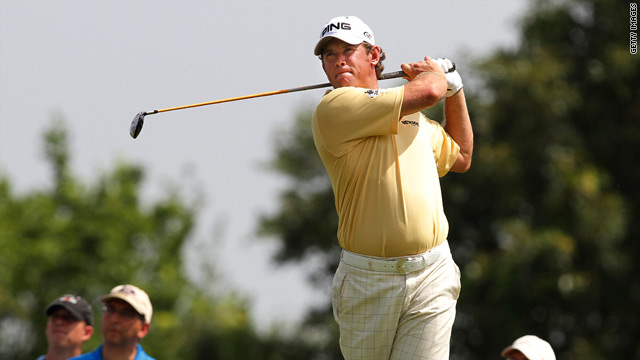 Lee Westwood birdied the last three holes in his second round at the St Jude Classic in Memphis.
STORY HIGHLIGHTS
RELATED TOPICS

(CNN) -- Lee Westwood birdied the final three holes in a second round 68 to take a share of the lead at the halfway point of the St Jude Classic in Memphis.

Westwood initially struggled to maintain the good form which saw him set a course record 63 and top the leaderboard outright after round one.

But the Englishman rallied and salvaged his round with birdies on 16, 17 and 18 at the TPC Southwind course.

"I set myself a little task of trying to birdie two of the last four holes to shoot under 70," Westwood told the official PGA Tour Web site.

"I birdied the last three holes and had a good chance at 15. I'm pleased with that. It was a great way to finish off the day and send it into tomorrow with momentum."

The world number three is tied at nine under par with American Garrett Willis, who followed an opening round 66 with an impressive 65, which also included a rush of late birdies at hole's 15, 16 and 18.

The pair are one shot ahead of Californian Charley Hoffman, who also shot a 65, and two ahead of Sweden's Robert Karlsson, and Robert Garrigus, who both posted second round scores of 66.

Northern Ireland's Rory McIlroy moved up the leaderboard after carding a 66 and is tied for 10th place with five others including Boo Weekley.

Other European stars didn't fare so well. Padraig Harrington disappointed with a 74, after an opening 65 and slipped back to one under par and a tie for 32nd place.

Ian Poulter, the current world number five, fared even worse posting a two over par 72 -- the same as his score on day one -- and failed to make the cut.