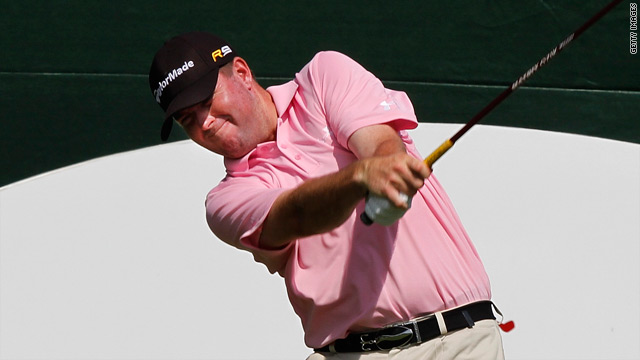 (CNN) -- American Robert Garrigus has a two stroke lead going into Sunday's final round of the St Jude Classic in Memphis after shooting a four under par 66 in Saturday's third round.

Birdies at the 11th, 12th and 15th, as well as an eagle at the par five 16th secured Garrigus the outright lead on 11 under par, two strokes ahead of Sweden's Robert Karlsson.

The Swede had a mixed day but managed to card a two under par 68, which included a chip in for a birdie at the last hole.

It concluded an eventful round for the 40-year-old which included five birdies and three bogeys and left him on nine under par.

Karlsson is one shot ahead of Heath Slocum who moved up from 12th place to third with a bogey-free round of 66.

Overnight joint leader, Lee Westwood slipped to third place after shooting a one over par 71. The Briton, who shot a seven under par 63 in the first round, had a patchy round which included four bogeys and three birdies.

But at eight under par, Westwood is still in contention to claim his first PGA tour title since winning the Freeport-Mcdermott Classic in 1998.

Garrett Willis, who shared the lead with Westwood going into the third round, had a disappointing round of 73, leaving him five shots off the lead.

Rory McIlroy was unable to capitalize on his impressive second round 66. The Northern Irishman shot a two over par 72 and finished the day in a tie for 20th place, eight shots adrift of leader, Garrigus.

Padraig Harrington produced a steady round of 71 -- an improvement after Friday's round of 74 -- leaving the Irishman on even par, eleven shots off the pace.