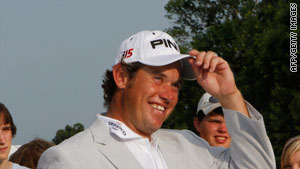 (CNN) -- Lee Westwood took advantage of a collapse by Robert Garrigus and then fought off Robert Karlsson in a playoff to win the St. Jude Classic on Sunday to capture his second PGA Tour title and first in 12 years.

The Englishman defeated Sweden's Karlsson on the fourth playoff hole to capture the tournament in Memphis. Garrigus blew a three-stroke lead on the final hole and ended up finishing third.

For Westwood, Sunday's victory was especially sweet after recent near misses on the PGA Tour. The European top-rated player had finished as runner-up to this year's Master, finished in a tie for fourth at The Players last month and had recorded top three finishes at the 2008 U.S. Open and 2009 PGA Championships.

"You try to do the right thing all the time," Westwood said, as reported on the PGA website. "It doesn't always work for you. I've been in contention a lot, especially this year, and I suppose I got a break today with other people's misfortune but made the most of it and took a chance."

Westwood had at least a share of the lead for most of the final round after hitting three birdies in the first four holes. But he still trailed Garrigus by three shots entering the 18th hole.

On the final hole Garrigus drove his tee shot into a lake, according to the PGA website. His shot off the drop flew into trees left of the lake. A two-putt on the green gave him a triple bogey for the hole.