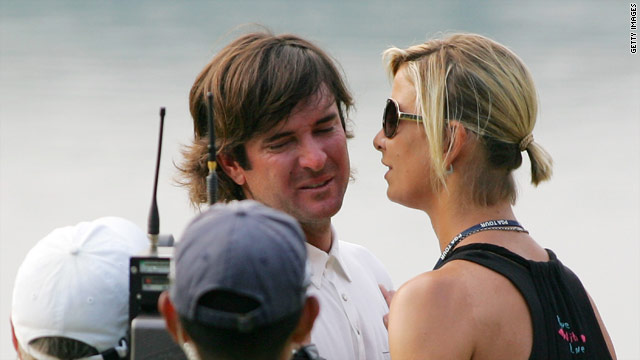 (CNN) -- A tearful Bubba Watson claimed his maiden PGA Tour victory after winning a three-man playoff for the Travelers Championship in Connecticut.

Watson came from six behind on the final round to card a 66 as he went into extra holes with fellow Americans Corey Pavin and Scott Verplank as all finished on 14-under-par.

Ryder Cup captain Pavin went out at the first sudden death hole and Verplank found trouble at the second, leaving Watson to two-putt for a par on the short 15th.

Watson's father is battling cancer and he was foremost in this thoughts after his triumph.

"I want to thank my dad and mom because without them I would be nothing. My dad is battling cancer now. 'Dad I am praying for you. I love you," he told gathered reporters.

Dad I am praying for you. I love you
--Bubba Watson
RELATED TOPICS

Watson had to survive a double bogey on the 17th in regulation play before he birdied the final hole to make the playoff.

"For me to get into a playoff after shooting four-under was unreal, and to somehow make that par putt to win was unreal," he said.

England's Justin Rose had a three-stroke lead going into the final round, bidding to follow up his maiden PGA Tour victory at the Memorial.

But he fell away on the back nine for a five-over 75 as Watson ended the run of British success on the PGA Tour.

On the European Tour, England's David Horsey also posted a maiden triumph as he shot a five-under-par 67 to come from five shots behind to win the BMW International Open in Munich.

The 25-year-old carded birdies in two of the last three holes to finish one shot clear of compatriot Ross Fisher on an 18-under par total of 270.

Bradley Dredge of Wales, who led for the first three days and held a three-shot overnight advantage, finished in a five-way tie for third a further shot back after a two-over par 74.

"It's unbelievable and it's not sunk in yet," Horsey told the official European Tour website.