Mickelson plays down No. 1 bid ahead of Scottish Open 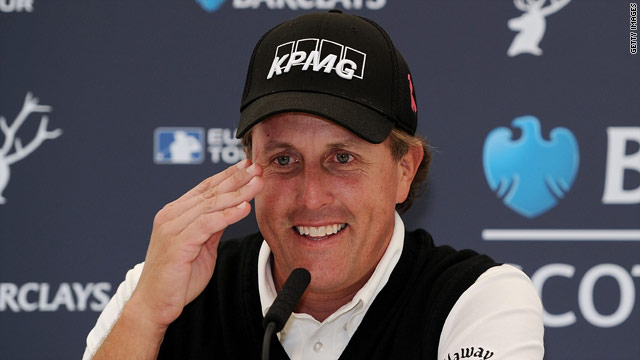 Phil Mickelson has another chance to claim the number one ranking at the Scottish open this week.
STORY HIGHLIGHTS

(CNN) -- Phil Mickelson insists that he is concentrating on winning this week's Scottish Open rather than his opportunity to take golf's world number one ranking from rival Tiger Woods.

The 40-year-old has another chance to end his fellow American's 607-week reign at the top of the game by finishing second or better at the warm-up event for the British Open.

Woods, who held onto the No. 1 ranking after Mickelson failed to win the U.S. Open and other PGA Tour events, has opted to practice at home before heading to St Andrews.

Mickelson has been ranked second for 250 weeks, though he briefly lost that position to compatriot Steve Stricker in February.

"It's not something I really think about as yet. I am just trying to get my game sharp, and if I play well then the results will happen," he told reporters at the Loch Lomond course, where he finished as runner-up in 2007.

"It will be cool just to win here, I've come so close a couple of times. Winning here, and becoming number one, would be as a result of playing well. That's my main focus."

So much for the 'new' Tiger

The American, who claimed his fourth major at the Masters in Augusta in April, also spoke about his hopes for the British Open at St Andrews next week.

"The best preparation for the Open is to get into contention here and be challenging on Sunday," said Mickelson, whose best result in the major was his second-placed finish at Royal Troon in 2004.

"I have had dreams of winning the Open since I came over for my first one at Royal Birkdale in 1991. I feel now that I should be contending. It's a tournament I want to win."