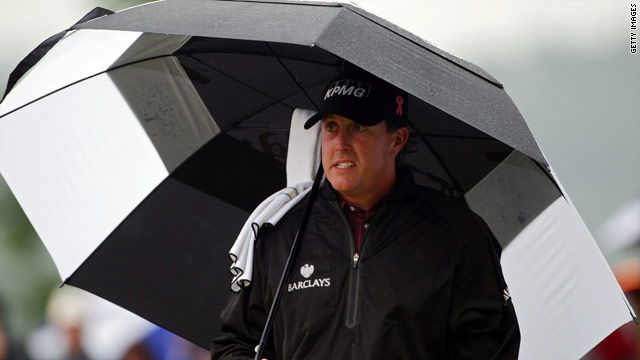 Phil Mickelson needed to finish in the top two to claim the world number one spot from Tiger Woods.
STORY HIGHLIGHTS

(CNN) -- Phil Mickelson's hopes of claiming the world number one spot from Tiger Woods were dashed for the time being after he missed the cut at the Scottish Open in Loch Lomond on Friday.

The Masters champion came into the tournament needing a top-two finish to overtake Woods but a second round 74 -- which included a quintuple bogey nine -- left him on three-over-par 145, 13 shots behind leader Darren Clarke.

Mickelson, who is gearing up for next week's British Open at St Andrews, was level par after the first round but he came unstuck at the par-four 18th -- the ninth hole of his second round.

Battling heavy rain, he smashed his drive straight into water and repeated the feat with his next shot to leave himself playing five off the tee.

Mickelson recovered with two birdies on the back nine but it wasn't enough to prevent him missing the halfway cut by a single shot.

However, the 40-year-old -- who could still overtake Woods by considerably outperforming his rival at the Open -- was not alone in failing to make it back for the final two days of the event.

Meanwhile, Clarke hit a four-under-par 67 to surge into a three-shot lead from Italian Edoardo Molinari.

The Northern Irishman, who has not won since the Dutch Open in 2008, struck five birdies and just a single bogey to follow up his opening 65.

The former European Ryder Cup player is now superbly placed to claim the final British Open qualifying place that is up for grabs from the event.