Oosthuizen leads way at British Open as winds cause havoc 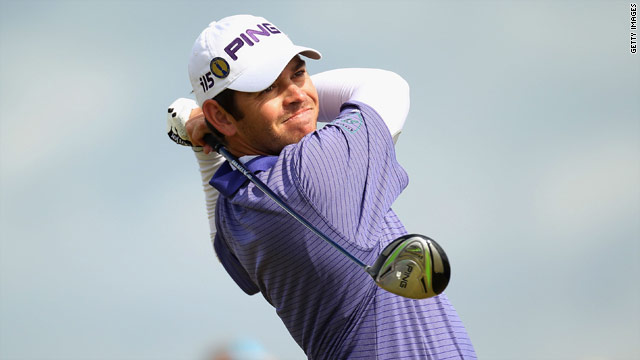 Oosthuizen carded a second round 67 on his way to matching the halfway record at St.Andrews.
STORY HIGHLIGHTS

(CNN) -- South African Louis Oosthuizen held the halfway lead in the British Open as gale force winds derailed the challenge of overnight leader Rory McIlroy and a clutch of other contenders.

The 27-year-old, nicknamed "Shrek" by his close friends, was second overnight to leader McIlroy, but made use of the kinder morning conditions to card a 67 for a 12-under total of 132.

This matches the lowest 36-hole total at the home of golf, set by eventual winner Nick Faldo and Greg Norman in 1990.

But McIlroy, who blitzed the Old Course on the first day with a nine-under 63, was 17 shots worse off in his second round with a sorry 80.

The 21-year-old from Northern Ireland was out in the harshest of the weather, which caused a delay of just over an hour, and six bogeys and a double bogey told the tale of his miserable day.

It was summed up by his play on the 18th where he nearly drove the green but saw his initial putt blown nearly as far away, bringing a wry smile from McIlroy, who needed two more putts to complete his round and stay at one-under-par.

"I don't think they should have called us off the course," McIlroy told gathered reporters after his difficult day.

"When we got back out there the conditions hadn't changed. The wind probably got a little bit worse. It probably wasn't a smart move."

World number one Tiger Woods played superbly in the testing winds and almost holed his drive to the par-four 18th.

He narrowly missed the eagle putt which would have seen him return a level par 72, but at four-under 140 is still firmly in contention going into the weekend.

It was a battling display from the 14-time major winner with his arch-rival and fellow American Phil Mickelson earlier shooting a 71 for level-par 144.

Oosthuizen's earlier heroics gave him a five-shot lead over former British Open champion, 50-year-old Mark Calcavecchia, who is on seven-under 137.

Lee Westwood and Paul Casey are one shot further behind at six-under with a third Englishman Steven Tiley also on that mark after 10 holes when play was called off.

Oosthuizen, a former farmboy with a gap-tooth smile, learned his trade at the academy run by South African star Ernie Els, winning his first title at the Andalucia Open on the European Tour this season.

My friends say I look like Shrek -- some of my friends -- and you can't choose your friends !
--Louis Oosthuizen
RELATED TOPICS

"It was unbelievable what he did for me," Oosthuizen told the official British Open website.

"He is such a good mentor and probably without him, those three years in his foundation, I wouldn't have been here."

Asked about being named after a film character, Oosthuizen laughed it off.

"My friends say I look like Shrek -- some of my friends -- and you can't choose your friends, so what can I say?" he said.

Another player sitting comfortably in the clubhouse was U.S. Open champion Graeme McDowell, who carded a four-under 68, for five-under 139 as he bids for a second straight major win, but the real winner on the day was the Old Course which bit back after the low-scoring of day one.

Just before play was called off for the day, there was an emotional farewell to St. Andrews for five-time British Open champion Tom Watson, who was also caught in the strong winds and missed the cut.

The 60-year-old, runner up at Turnberry last year, stood for several moments on the Swilcan Bridge to pose for photographers and acknowledge the galleries.