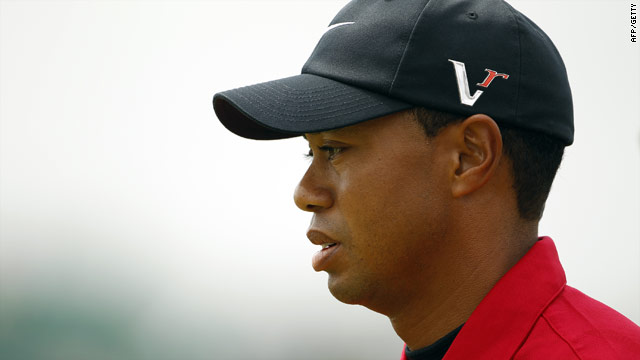 Tiger Woods was donned in his favorite red but could make no impression in the final round.
STORY HIGHLIGHTS

(CNN) -- World number one Tiger Woods closed with a lackluster level-par 72 as his winless stretch in the majors extended to seven attempts after his latest disappointment at the British Open.

It left him on three-under-par in a tie for 23rd place and bitterly disappointed with his performance.

"Over the week I just couldn't get anything together," he told BBC Sport.

Woods, frustrated by his form on the greens, changed his putter before the start of proceedings at St.Andrews, but it proved to no avail and he switched back for the final round.

"This week was one of the worst for putting I've ever had," he admitted.

14-time major winner Woods is chasing the all-time record of 18 held by fellow American Jack Nicklaus but his last success at the highest level came at the 2008 U.S. Open.

He underwent knee surgery after that epic victory and returned in 2009 to win a clutch of tournaments on the PGA Tour, but with no luck in the four majors.

But it was damaging revelations about his private life at the end of last year which left many to question if he could be a force on the course again.

Woods went into self-imposed exile for four months before returning to post fourth-placed finishes in both the Masters and U.S. Open.

He came to the third major of the season as pre-tournament favorite and was handily placed after a five-under 67.

But Woods had the misfortune to be caught in the worst of the winds which battered the Old Course on Friday and despite a battling effort slipped back to four-under.

Saturday saw him card a disappointing one-over-par 73 to leave him 12 shots behind runaway leader Louis Oosthuizen and with only pride to play for.

Minor consolation for Woods will see him stay at the top of the rankings for the 267th consecutive week as his arch-rival Phil Mickelson missed the chance to dethrone him with his own disappointing display at St.Andrews.

Mickelson still believes the 34-year-old Woods can overtake Nicklaus in the all-time list.

"It's certainly in his favor. He only has a few to go," Mickelson said. "You just never know when his game turns," he told AFP.

The final major of the year, the PGA Championship takes place at Whistling Straits in Wisconsin next month.