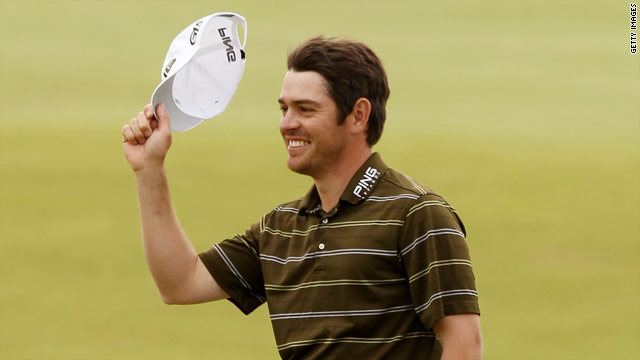 Oosthuizen delighted the galleries with his superb play all week at St.Andrews.
STORY HIGHLIGHTS

(CNN) -- Each year when I watch the British Open I am reminded of two extremely important concepts that every golfer should learn and master.

Louis Oosthuizen and the rest of the field (including master of the lob shot, Phil Mickelson) were putting and bump and running from fifty yards and in, all week.

The pros almost always do this when the greens are surrounded by tight fairway grass, and you should too.

Why? Because that was the only club that would insure that the worst he would make was a bogey.

With an eight-shot lead, he was only interested in winning, and putting was a guarantee.

Whenever I teach a player how to approach a green, I always talk about odds. The first thing I teach my students is to always take the path of least resistance by maximizing ground time and minimizing airtime.

The idea behind this concept is that whenever you can, you should use as much of the ground as you can and get the ball rolling to the hole as soon as possible.

Your misses will be better because when you fly the ball, you need a bigger, faster swing and a more precise contact.

When you miss hit a ball with a larger swing the ball will usually go over the green and end up in more trouble, further away from the pin.

When assessing your shot, ask yourself, "can I putt this?" If the answer is yes, then putt it. It takes a lot less effort and talent to putt a ball and run it to the hole.

That's why you get three points for a long shot in basketball as opposed to two points for a lay up, it's a game of odds and on a three-pointer, the odds are against you.

Your worst putt will always be better than your worst chip or pitch. You might not get the ball up and down every time, but you will definitely eliminate the dreaded round killing big numbers.

There is an old adage in golf that says, "hit down on your irons, but sweep your woods."

However, every time I saw a pro hit a wood off of the fairway at St. Andrews, I saw divots flying.

Louis Oosthuizen hit a three-wood second shot on the par five 14th hole and right after he hit the ball, a puff of dirt exploded into the air.

When a ball is on the ground, a good player always hits down on the ball and tries to take a divot.

It doesn't matter if you are hitting a wedge or a three wood, hitting down on the ball is how you get the ball in the air and create solid contact.

The reason your divot will be more "sweeping" with a wood as opposed to an iron is because woods are longer which creates a naturally flatter swing plane and they also have much wider soles than irons.

Your attitude should always be to hit down on your woods and take a divot (except a driver on the tee) especially on closely mown grass, otherwise you will tend to hit up on the ball and hit thin, low dribbling shots.

A simple drill is to place a tee in the ground ahead of your ball and practice hitting the ball and then the tee. The tee should come out of the ground every time.

I always enjoy watching the British Open because from a learning standpoint the conditions that the Open courses present, teach us and remind us of the essence of what this game was about.

I have had the good fortune of playing St. Andrews and many of the links courses in Scotland and the first thing that you quickly realize is that the game was originally designed around extreme wind and weather and less than perfectly manicured lies.

You must use the ground and roll the ball when you can and when you hit a wood off those tight fairways you have to hit down and take a divot. Louis Oosthuizen was the master of these concepts this week.