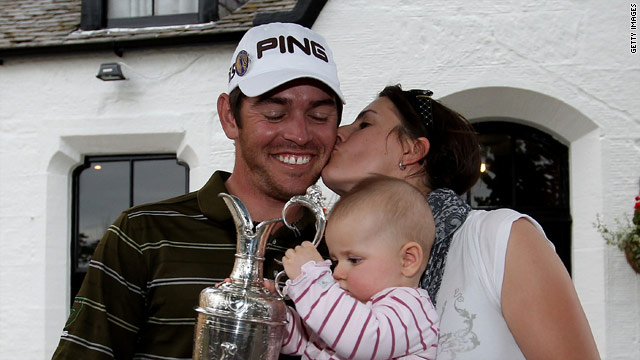 Louis Oosthuizen celebrates his seven-stroke victory at the British Open with his wife Nel-Mare and daughter Jana.
STORY HIGHLIGHTS

(CNN) -- The little-known South African Louis Oosthuizen shocked the world of golf as he stormed to his first ever major win on Sunday with a runaway seven-shot victory at the British Open at St. Andrews.

Not bad for a farm boy who failed to make the cut in seven of his previous eight major championships.

Despite many having difficulty pronouncing his name, few will forget Lodewicus Theodorus "Louis" Oosthuizen's dazzling performance at St. Andrews.

The win really is a fairytale story for the 27-year-old who lives on a farm in Gourits River, South Africa, next door to his parents.

Oosthuizen, who also has a home in Manchester, England, was born in Mossel Bay, South Africa.

His father was a farmer by trade yet all young Oosthuizen wanted to do growing up was play golf and tennis.

Oosthuizen decided to ditch the tennis racket for good in favor of the club when he was 10 before spending three years at the Ernie Els & Fancourt Foundation during his teenage years.

RELATED TOPICS
Without him (Ernie Els), those three years in his foundation, I wouldn't have been here
--Louis Oosthuizen

Oosthuizen is eternally grateful to the foundation, which was set up by Els in 1999 to help nurture South Africa's next generation of star golfers.

It gave him financial support and coaching on the course his family could never offer their son.

"It was unbelievable what he (Ernie Els) did for me," Oosthuizen told the official British Open website.

"He is such a good mentor and probably without him, those three years in his foundation, I wouldn't have been here."

It was not long before the future British Open champion started tasting success after teaming up with compatriot Charl Schwartzel to win his first title at the World Junior Team Championships in 2000.

The teenager then claimed six amateur titles including the Irish Amateur Open Stroke Play title in 2002 before turning professional at 19 in the same year.

But despite hitting a 57 during a practice round on the par-72 Mossel Bay Golf Club course, along with gaining his European Tour card in 2003, his early performances in the paid ranks were less impressive.

He did manage to record the first of his eight professional wins on home soil at the 2004 Vodacom Origins of Golf Tour.

But joy was quickly turned into despair as "Shrek" -- as he is fondly known to his friends due to his gap-tooth smile -- failed to qualify for his first British Open at St Andrews in 2005.

The season ended in disappointment as Oosthuizen finished 139th on the money list forcing him to return to qualifying school to regain his European Tour card.

The South African responded to the early setback by making 2007 his best year so far on the golf circuit, winning three titles on the Sunshine Tour including the Telkcom PGA championship.

However, Oosthuizen's stop-start career continued as he failed to play in a major after missing the cuts for the Masters, the British Open and the PGA Championship in 2009.

But 2010 is without doubt his most successful and memorable year on and off the course to date.

First, Oosthuizen became a father after his wife Nel-Marie gave birth to their baby daughter Jana.

Then in March he finally won his first European Tour event at the Open de Andalucia in Spain beating England's Richard Finch and Peter Whiteford of Scotland, who were tied second by three strokes.

A victory of sorts in America was next, as the South African won the Par 3 Contest at the 2010 Masters in April, but he missed the cut in the tournament proper at Augusta.

He also missed the weekend action in the U.S. Open at Pebble Beach so the signs were not promising as he traveled to the east coast of Scotland for the third major of the season.

Yet Oosthuizen left Paul Casey, Lee Westwood and the world number one Tiger Woods in his wake, with his final round of one-under-par 71 giving him a 16-under total of 272 and his only major title so far.