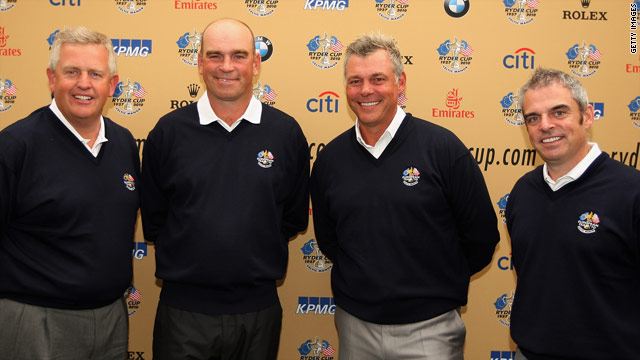 (CNN) -- European captain Colin Montgomerie has named Darren Clarke, Thomas Bjorn and Paul McGinley as his three vice-captains ahead of the Ryder Cup clash against the United States in October.

Montgomerie has selected an experienced trio to assist him as he attempts to wrest the trophy back from the U.S. who won it at Valhalla, Kentucky in 2008.

The Scot played with his three vice-captains during Europe's Ryder Cup triumph in 2002 and is convinced his trio possess the qualities needed to reclaim the crown.

"The Ryder Cup is about passion, commitment and will to win and all three men I have named as my vice captains possess these qualities in abundance," Montgomerie told a press conference.

"The four of us up here have huge respect from the players that will be in the team and that is vital.

"This will be the strongest backroom staff Europe has ever had along with the strongest on-field team we've ever had. It is a fabulous time for golf in Europe.

These are the three that will help me hopefully regain Ryder Cup.
--Colin Montgomerie
RELATED TOPICS

"We are very much together and will be making the decisions together. These are the three that will help me hopefully regain Ryder Cup."

Northern Irishman Clarke has participated in five Ryder Cups, winning on four occasions. The last time came in 2006 when Clarke won three points out of three just a month after his wife Heather died of cancer.

Clarke said: "It will be an honor to work under Monty and be part of his team. I'm just delighted to be part of it. We will do whatever we have to do."

Irishman McGinley sank the clinching put for Europe on his Ryder Cup debut in 2002 and was also part of a winning team in 2004 and 2006. Bjorn, from Denmark, tasted success on both his appearances, in 1997 and 2002.

McGinley said he expects Montgomerie's team to be "probably the best ranking European team ever," while Bjorn added: "I am sure we have a strong team to win the trophy back."

The Ryder Cup will be played between October 1-3 at Celtic Manor in Wales.