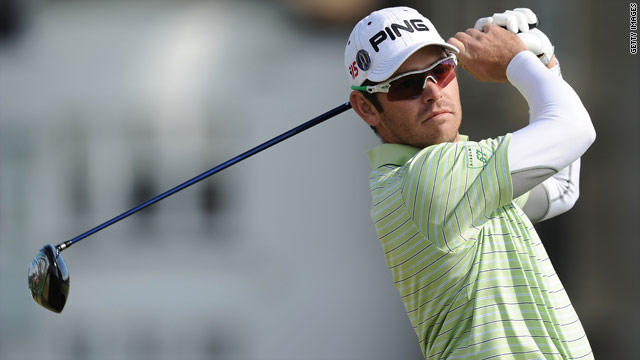 Louis Oosthuizen maintained his red-hot form with an opening round of 67 in Stockholm.
STORY HIGHLIGHTS

(CNN) -- British Open champion Louis Oosthuizen carried on where he left off at St Andrews, by sharing the lead after the opening round of the Scandinavian Masters in Stockholm.

The South African -- who cruised to an astonishing seven-stroke victory on Sunday -- posted a five-under-par round of 67 to top the leaderboard alongside American Dustin Johnson and Richard Green of Australia.

The trio are a shot ahead of a group of four players, including Korean KJ Choi and Scottish Open champion Edoardo Molinari -- with the Italian needing to finish in the top two to move into an automatic European Ryder Cup position.

Five players -- including local favorite Niclas Fasth -- are another stroke behind at the Bro Hoff Slott Golf Club in the Swedish capital.

Oosthuizen told the official European Tour website: "The Open win has definitely drained me, but the crowds here were unbelievable, cheering me onto every green and every tee.

The 27-year-old began his round with a birdie and came home in just 32 shots including finishing in style with a 30-foot putt for birdie.

Meanwhile, Green, who is seeking his third European Tour title, hit seven birdies in his round to keep pace at the top.