Oosthuizen trails leaders by a shot in Scandinavian Masters 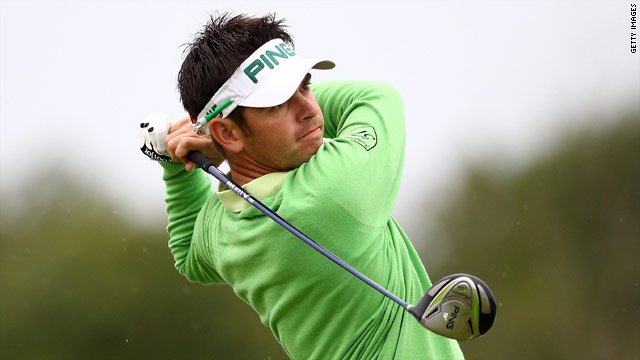 Oosthuizen has continued his superlative form in the European Tour event near Stockholm.
STORY HIGHLIGHTS

(CNN) -- British Open champion Louis Oosthuizen will go into the final round of the Scandinavian Masters one shot behind the leaders after a final hole bogey.

The South African pulled his approach into a bunker, a "stupid" shot he said, and missed his par putt from 18 feet to fall out of the lead.

Home hope Richard Johnson and Korean KJ Choi will go out in the final group Sunday on 10-under-par with Oosthuizen in close pursuit.

He is bidding to become the first golfer to follow a British Open triumph with success in a European Tour event the following week.

Johnson and Oosthuizen both shot two-under 70, while halfway leader Choi carded a 71.

New Zealander Mark Brown, with a best-of-the-day 67, and Argentina's Rafa Echenique are tied fourth on seven under.

Italy's Edoardo Molinari, who is challenging for a place in the European Ryder Cup team, is a shot further back.

"It was a bit disappointing," Oosthuizen told the official European Tour website.

"I made two thinking errors on the course and it cost me two bogeys."

PGA Tour regular Choi is bidding to add to his only European Tour victory at the German Masters in 2003.

The 40-year-old had to take off his shoes and socks to play his third to the long 13th after his approach fell close to a lake.

He eventually salvaged a par but Johnson and Oosthuizen both birdied the 622 yard 15th to draw level with him at 10-under.

Oosthuizen, who won the Andalucia Open for his maiden European Tour win earlier this year, catapulted into golf's elite with his first major win at St.Andrews last Sunday, winning by a massive seven shots on the Old Course.

In the British Senior Open at Carnoustie, former European Ryder Cup captain Bernhard Langer has a three-shot lead over the current United States skipper Corey Pavin going into the final round.

The two-time Masters winner is seeking his first senior major title and carded a two-under 69 to pull clear of Pavin, who is tied at three-under with fellow American Fred Funk.

American Morgan Pressel drained a six-foot eagle putt on the final hole to claim a two-shot lead after the third round of the Evian Masters -- a joint LPGA and Women's European Tour event.