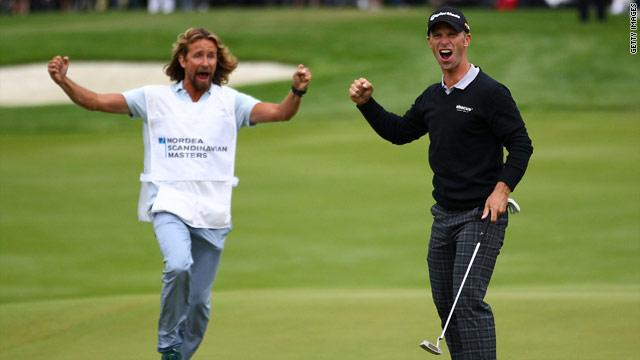 The U.S.-based 33-year-old drained a 30-foot birdie effort at the final hole to end the hopes of Argentina's Rafa Echenique and follow up his 2002 victory in a co-sanctioned Australian event.

Johnson went into the tournament without his regular caddy Lance Ten Broeck, who played in the British Senior Open instead, so his friend Anders Timmell -- a Stockholm radio DJ -- carried his bags instead.

While Ten Broeck missed the cut at Carnoustie in Scotland, Johnson carded a final-round one-under-par 71 to finish on 11-under 277 at Bro Hof Slott.

This is a huge tournament to win for a Swede and I'm speechless right now. It's epic
--Richard S. Johnson
RELATED TOPICS

"It's one of the sweetest things I've ever done. Just to come up the 17th and 18th is magical," the world No. 329 told the European Tour website.

"This is a huge tournament to win for a Swede and I'm speechless right now. It's epic."

World No. 371 Echenique closed with a 69 to be one shot back, while Italy's Edoardo Molinari claimed third place with the same score after a 20-foot closing putt lifted him above a group on 280 which included British Open champion Louis Oosthuizen.

"I didn't play well. I didn't drive well and it put everything under pressure. I had to push it at the end, but Richard played brilliantly," the South African said.

"I'm a bit disappointed, but after last week I was hoping to make the cut and I finished fourth, so I'm happy."

Johnson went into the final round sharing the lead with K.J. Choi, but the veteran Korean collapsed with a 78 to finish back in 13th on 284.

Meanwhile, Germany's Bernhard Langer claimed his first major title on the seniors circuit with a one-shot victory at the British Open on Sunday.

The 52-year-old finished one shot clear of U.S. Ryder Cup captain Corey Pavin after his closing one-over 72 gave him a total of five-under 279.

Pavin, 50, playing in his first seniors major, shot 70 as he was unable to peg back the former European Ryder Cup leader's three-shot overnight lead.

At the women's Evian Masters event in France, world No. 4 Jiyai Shin snatched a one-shot victory with a birdie at the final hole.

The 22-year-old is expected to return to the top of the rankings after her closing five-under 67 made her the first South Korean to win the tournament, which is sanctioned by both the European and LPGA Tours.

She finished on 14-under 274 ahead of fellow Korean Na Yeon Choi (66), overnight leader Morgan Pressel (70), and another American Alexis Thompson (67).

At the Canadian Open in Toronto, Dean Wilson took a four-shot lead into Sunday's final round of the PGA Tour event after shooting his third successive five-under 65.

The 40-year-old, playing on a sponsor's exemption, will be chased by the second-placed group of Carl Pettersson, Tim Clark and Bob Estes.

Sweden's Pettersson earlier broke the tournament record with a 10-under 60 at St. George's as he just missed out on the magical 59 mark when his final putt from 30 feet went just wide of the hole.