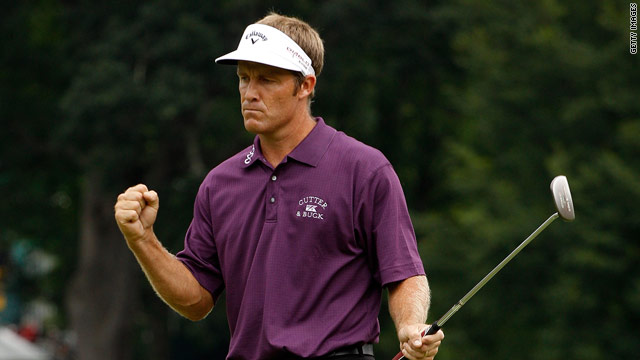 (CNN) -- Australian Stuart Appleby made history on Sunday evening by becoming the first non-American to shoot the magical 59 mark on his way to a one-stroke win in the inaugural Greenbrier Classic in West Virginia.

Appelby becomes only the fifth player in USPGA history, but remarkably the second this year after Paul Goydos, to achieve the feat -- although the other four have all been Americans.

"I was quite comfortable," Appleby told the official PGA Tour website. "It's not a nerve-racking thing to be involved in. I had a lot of opportunities and I made them. It was great to do that to win the tournament," he added.

I had a lot of opportunities and I made them. It was great to do that to win the tournament
--Stuart Appleby
RELATED TOPICS

Appleby carded nine birdies and an eagle in his 11-under-par round to claim his ninth career title and the 39-year-old added: "I did the math. I was chasing Jeff, who was heading toward the finish line.

"At the same time I was playing well and I thought if I could keep making birdies ... I knew I was going to run out of holes. There was plenty of (birdie chances) coming in."

The only prior 59s in US PGA history were Al Geiberger in 1977, Chip Beck in 1991, David Duval in 1999 and Goydos just three weeks ago at the John Deere Classic.

Overton was generous in defeat, telling the PGA Tour website: "I got beat by a 59, what can you say? I played great, hit a lot of great shots, but you can't win golf tournaments when you putt it that bad."

The 27-year-old is still waiting for his first PGA Tour title and now has three second-placed finishes already this year.