Woods sinks to new low as Mickelson falters in bid to become No. 1 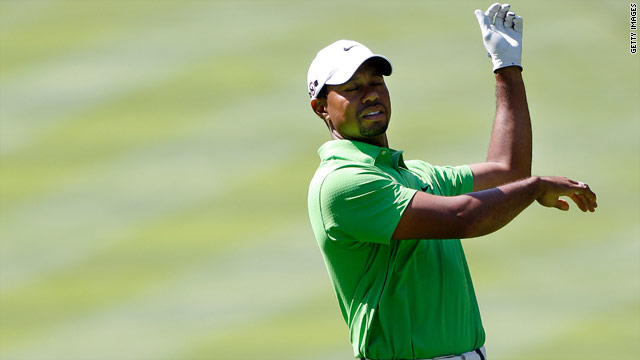 Tiger Woods dropped his club after playing his approach shot from the fairway on the 18th hole at Firestone.
STORY HIGHLIGHTS

(CNN) -- Tiger Woods slumped to the worst 54-hole total of his professional career on Saturday, but Phil Mickelson still has plenty of work to do to finally claim his longtime rival's coveted No. 1 golf ranking.

Woods' five-year reign appeared to be almost over after he shot a five-over-par 75 in the third round of the WGC-Bridgestone Invitational in Ohio, where he is the defending champion.

It was his worst score in 47 competitive rounds at Akron's Firestone County Club, a favorite course of his where he has won a record seven times.

That left him on 11-over 221, eclipsing his 10-over totals at the 1996 and 1998 Tour Championship events, and in danger of beating his worst finish on the PGA Tour -- 60th on his debut at the Greater Milwaukee Open 14 years ago.

Mickelson, who has been at No. 2 in the rankings for a record 257 weeks, needs to finish fourth on Sunday if 78th-placed Woods remains outside the top 37.

But he made a nervous start on Saturday, bogeying his first hole after driving into the trees, and ended the round tied for 10th on five-under 205 after carding an erratic 71.

His waywardness off the tee saw the 40-year-old, a four-time major winner including this year's Masters triumph, drop his third and fourth shots of the day at 14 and 15 before closing with pars.

Mickelson was four shots behind joint leaders Ryan Palmer and Sean O'Hair, with the American duo shooting 63 and 64 respectively.

He admitted later that he needed to play better on Sunday, but told CBS that he would feel more comfortable -- and less pressure -- teeing off before the final pairings.

"With the players before us shooting six and seven under, it felt like we were trying to keep up. It was difficult, but now I'll have the chance to set the pace," Mickelson said.

I drove it terrible, hit my irons terrible, didn't putt well and it added up to a lot. If Phil plays the way he's supposed to this weekend, then he'll be No. 1
--Tiger Woods
RELATED TOPICS

Having teed off at 7.55 a.m., Woods bogeyed two of his first four holes, rallied briefly with a birdie at the par-three fifth, but then went bogey-double-bogey at seven and eight.

A birdie at 11 halted the slide, but a succession of pars followed before he dropped shots at the final two holes to surpass Thursday's 74 as his worst ever score at the course, taking just three hours and 25 minutes to complete his round.

Only Sweden's Henrik Stenson and Michael Jonsson are below him in the 81-man field, which saw world No. 3 Lee Westwood withdraw on Friday due to ongoing calf problems which will rule him out of next week's PGA Championship.

Woods refused to talk to the media and headed straight to the practice range after a few brief comments to a PGA Tour communications official.

"Well, I drove it terrible, hit my irons terrible, didn't putt well and it added up to a lot," the 34-year-old said. "If Phil plays the way he's supposed to this weekend, then he'll be No. 1."

At the other end of the leaderboard, Palmer moved up 16 places with a flawless seven-birdie round, while O'Hair eagled the par-five second and also did not drop a shot.

Matt Kuchar shot 66 to be a shot behind the leaders, while South African veteran Ernie Els climbed to a tie for fourth on seven under after a superb 64 left him level with Justin Leonard (69) and Sweden's Peter Hanson (68).

Americans Hunter Mahan (66), Jeff Overton (67) and Bo Van Velt (69) were tied for seventh on 204, while Japan's Katsumasa Miyamoto leapt up to five under with a sensational day's best round of 62.

The 37-year-old, ranked 172nd in the world, fired seven birdies and an eagle at the par-four 17th to put himself right in contention in a six-strong group including Mickelson and first-round leader Bubba Watson (70).

Halfway leader Retief Goosen fell back to a tie for 16th on 206 after a 73 featuring a triple-bogey at his opening hole and a double at the ninth.

American Ryder Cup hopeful Anthony Kim had a morale-boosting round of 69, his best this week on his return after thumb surgery three months ago.

Kim, who in April won his third PGA Tour title, carded four birdies and three bogeys as he broke par for the first time following a 76 and 75.

Woods has struggled to regain the form that has seen him dominate golf for the past decade since finishing in a tie for fourth in his comeback at the Masters following revelations about his extra-marital affairs.

The richest sportsman in the world according to Forbes and Sports Illustrated, he missed the cut for just the sixth time in his career at the Quail Hollow Championship in late April.

After a break to recover from a neck injury, he then tied for 48th at the British Open on the St. Andrews course where he had twice before won the prestigious major event.