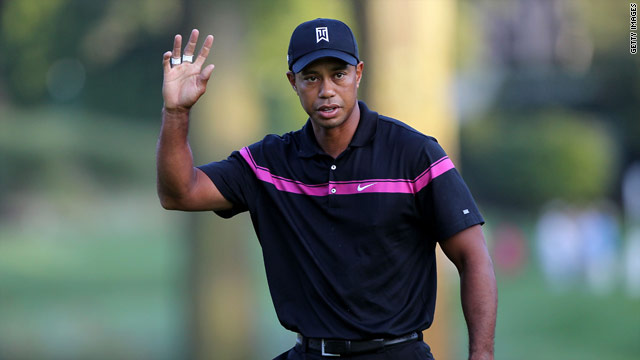 Woods celebrates one of his seven birdies during a fine opening round at The Barclays.
STORY HIGHLIGHTS

(CNN) -- Newly-divorced Tiger Woods carded his best round of the year to claim the early lead in The Barclays tournament on Thursday.

The world number one raced to an six-under 65 at the Ridgewood Country Club in New Jersey to grab the clubhouse advantage with fellow American Vaughn Taylor.

It was his best round since he was engulfed in the sex scandal which culminated Monday with public confirmation that he had split from his wife Elin Nordegren.

Woods carded seven birdies against a solitary bogey to make a strong start to his defense of his title in the first event in the PGA Tour playoff series.

Woods, who had to answer searching questions about his private life Wednesday, said he always intended to play in the big-money tournament.

"I came back. This is part of my job. It's what I do," Woods told the official PGA Tour website.

I came back. This is part of my job. It's what I do
--Tiger Woods
RELATED TOPICS

"Me coming back and playing golf had nothing to do with our decision to move our separate ways."

Woods is winless in nine events this year, coming back to golf after a self-imposed exile which ruled him out of the start of the season.

Two fourth place finishes in the Masters and U.S. Open were coupled with indifferent performances in regular PGA Tour events and at the WGC Bridgestone Invitational he finished 18-over-par.

But he has been working hard with swing coach Sean Foley and gave an upbeat assessment after his fine round.

"It's exciting to hit the ball flush like this again," Woods said.

"It's something I've been missing all year. I haven't hit it flush."

If he can continue at the same level, Woods will almost certainly assure himself a place in the U.S. team for the Ryder Cup against Europe in October.

His performances had seen him slip outside the eight automatic places and he is relying on selection by team captain Corey Pavin.

Meanwhile, in the final counting event for the European team for the Ryder Cup, Ross McGowan pulled out of the Johnnie Walker Championship at Gleneagles through injury after carding a 77.

It means Italian Francesco Molinari is guaranteed his slot in Colin Montgomerie's team.

Richard Finch of England leads after a six-under 66 with another cup hopeful Simon Dyson tied for seventh after a 68.