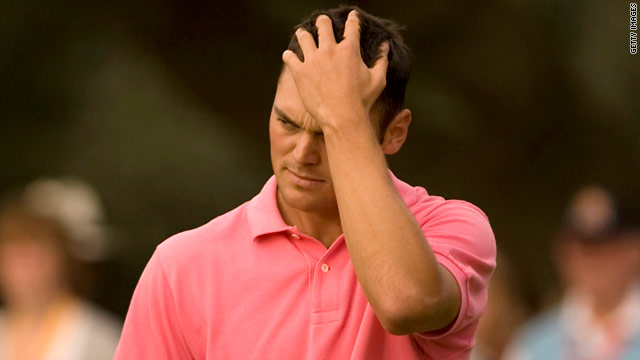 Martin Kaymer had another disappointing day at the Andalucia Masters in Spain.
STORY HIGHLIGHTS

(CNN) -- Martin Kaymer's dream of being crowned the best player in the world all but evaporated after another disappointing round at the Andalucia Masters.

The German can usurp Tiger Woods at the top of the rankings if he wins or claim a share of second with no more than one other player in Spain, but he only narrowly made the cut after shooting a round of 74.

Kaymer is 11 shots off the lead, held by Ryder Cup teammate Graeme McDowell on seven-under-par, and sits on four-over, just one stroke inside the cut.

If Kaymer doesn't claim top spot it will be Lee Westwood who forces Woods to relinquish the title he has held for 281 weeks, despite the Englishman being out of action with a leg injury.

After a one-over-par opening round Kaymer made two birdies and two bogeys on the front nine, before his putting deserted him on the home stretch.

Martin has not had his best two days, but he is a world class player
--Graeme McDowell
RELATED TOPICS

The German also dropped shots at the 14th, 16th and 18th. But his playing partner McDowell showed how it is done with a blistering 67 that took him two clear of the field.

The Northern Irishman did drop shots on the fifth and ninth but posted six birdies as he moved onto seven-under.

"I didn't play that well on the front nine, it was rather scrappy, but the back nine was good," McDowell told the European Tour website. "I gave myself birdie chances and positioned the ball well.

"Level par is a good job at Valderrama. I will just keep doing what I'm doing for the next couple of days.

"Martin has not had his best two days, but he is a world class player. I will have to control my own game, and I'm going to do my best; that's all I have to do.

"At Valderrama you've got to stay patient and focused."

McDowell's fellow countryman Gareth Maybin is two shots back in second place after a round of 68. Sweden's Niclas Fasth is on three-under with home favorite Miguel Angel Jimenez a further shot back.