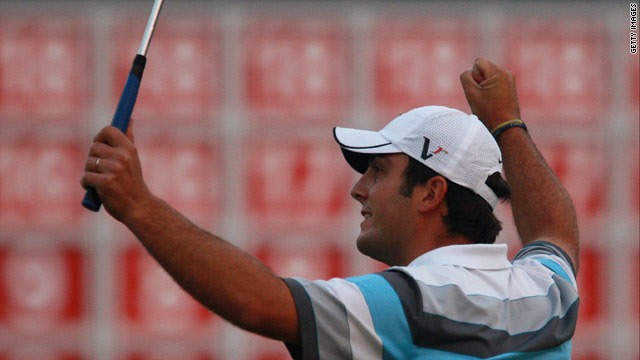 (CNN) -- Italy's Francesco Molinari held off the challenge of new world number one Lee Westwood to win the WGC-HSBC Champions tournament in Shanghai by a single shot.

Westwood needed to sink a testing eagle putt on the 18th to force a playoff with Molinari but had to settle for a birdie.

But it has proved a triumphant week for the Englishman, who has cemented his newly-acquired status as the tournament turned into a two-horse race between himself and Molinari, who was claiming his second career victory.

He finished on 19-under 269 with Westwood on 18-under on the now testing Sheshan International Course.

Tiger Woods, who lost his No.1 ranking to Westwood after five years, carded a fine 68 to leave him in a share of sixth at seven-under.

Had either Woods, Martin Kaymer of Phil Mickelson finished above Westwood this week they could have taken the top ranking.

He is the number one in the world and played fantastic golf, putting me under real pressure all the time and all the way to the end
--Francesco Molinari
RELATED TOPICS

Molinari and Westwood dominated the $7 million event, Asia's leading tournament, from start to finish, ending each round first and second.

But Ryder Cup man Molinari kept his nerve in a tense finish and in fading light to secure a final hole par which was enough to wrap up a memorable victory.

"He is the number one in the world and played fantastic golf, putting me under real pressure all the time and all the way to the end," Molinari told the official European Tour website.

"The (other players) were seven or eight shots behind and we just focused on each other and trying to birdie every hole because we were both playing well and knew that par was not good enough."

Both men shot five birdies for closing 67s as Molinari maintained the one-shot lead he had held overnight.

Kaymer finished in a tie for 30th at two-under with Mickelson sharing 41st at one-over, the same mark as Molinari's brother Edoardo.