Young gun Manassero is European Rookie of the Year 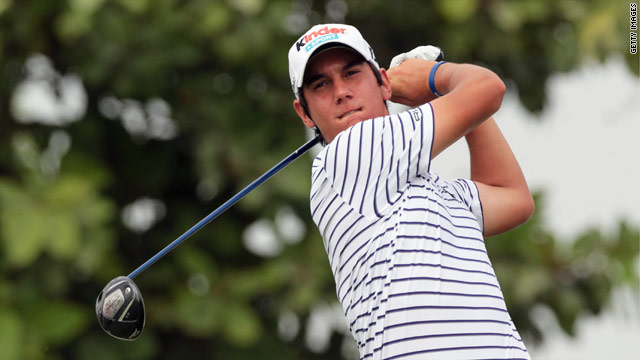 Matteo Manassero has made a big impression in his first season as a professional.
STORY HIGHLIGHTS

(CNN) -- Italy's teenage sensation Matteo Manassero has been named European Tour Rookie of the Year after a record breaking first season as a professional.

The 17-year-old became the youngest winner on the European Tour when he claimed the Castello Masters last month and finished the season with a flourish to claim 31st in the Race to Dubai.

Only joining the Tour in May, Manassero played 54 rounds in which he was 73-under-par with only seven scores over 72.

"It is a big honor to win the Rookie of the Year award," Manassero told the official European Tour website.

"I never expected to win on Tour so quickly and to win the Rookie of the Year award is a perfect way to end my first season as a professional."

Manassero is hoping to emulate Germany's Martin Kaymer, who clinched the Race to Dubai at the weekend.

"You see that Martin Kaymer won the Rookie of the Year only three years ago and now he is the European No.1.

"I hope I can follow in Martin's footsteps one day," he added.

Manassero, the first Italian to win the Henry Cotton trophy, was tipped for stardom after becoming the youngest winner of the silver medal for leading amateur at the 2009 British Open, finishing 13th at Turnberry.

In April, he became the youngest amateur to compete in the Masters and the youngest to make the halfway cut at Augusta.

He faced stiff competition from 25-year-old Welshman Rhys Davies, who pushed hard for a place in the Ryder Cup team after victory in the Trophee Hassan II tournament in Morocco, but the panel of golf writers gave Manassero the nod.