Woods stretches lead as he seeks first win of 2010 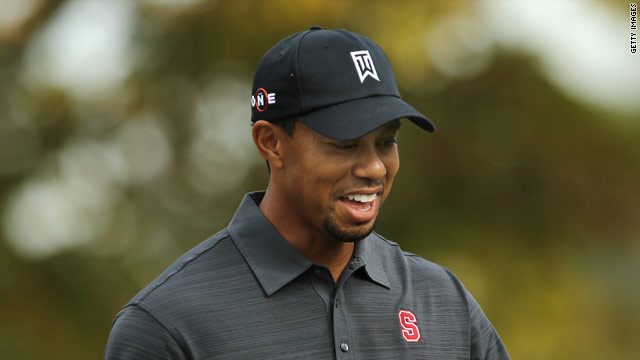 Tiger Woods is all smiles on his way to a six-under 66 to lead the Chevron World Challenge at halfway.
STORY HIGHLIGHTS

(CNN) -- Tiger Woods is saving his best in a disappointing year for last as he leads the Chevron World Challenge by four strokes at halfway in California..

Woods carded a flawless six-under par 66 for 13-under 131 to increase his lead to four strokes over U.S. Open champion Graeme McDowell.

The world number two has not won since the 2009 Australian Masters, but is well-placed to end that run in the 18-man invitational tournament, which is not an official PGA Tour event, but does carry world ranking points.

Woods, who is the tournament host and donates profits to his foundation, is certainly at home on the Sherwood Country Club layout.

"It feels good," Woods told reporters at the end of his second rond.

I've been here before, so it's not a strange feeling
--Tiger Woods
RELATED TOPICS

"I've been here before, so it's not a strange feeling.

"It's just one of those things where tomorrow is the same game plan, just go out there and plot my way along and take care of the par-fives."

Woods, who can temporarily reclaim the world number one spot from England's Lee Westwood, did indeed play the par-fives superbly, with an eagle on the second getting his round going.

McDowell continued his fine year with a 69 for 135, while fellow Northern Ireland star Rory McIlroy, is a shot further back after a 70.

Playing with Woods, he double bogeyed the final hole to fall back into a tie with England's Luke Donald, who charged up the leaderboard with a 66.

McDowell, pipped by Martin Kaymer for the Race to Dubai crown last week, is playing for the sixth straight week, but showing few signs of tiredness.

"Not my best ball-striking round today," McDowell said. "Played great yesterday, had it on a string, and today I wasn't quite sure where it was going to go. But hung tough ... to shoot three-under and not play my best, I'm pretty happy with that."

Away from the leaders, there were two notable shots.

England's Paul Casey carded a hole-in-one at the 188-yard 12th, while American Bubba Watson holed his second shot at the par-five 16th for a rare three-under albatross.

Meanwhile, Westwood showed no sign of giving up his new status as he led the Nedbank Challenge in South Africa by five shots after three rounds Saturday.

Westwood carded a one-under 71 in more testing conditions on the Gary Player Country Club course at Sun City for a 13-under 203 total. England's Ross Fisher and home player Tim Clark are tied in second at eight-under.

Spain's Miguel Angel Jimenez is a shot further back in fourth.