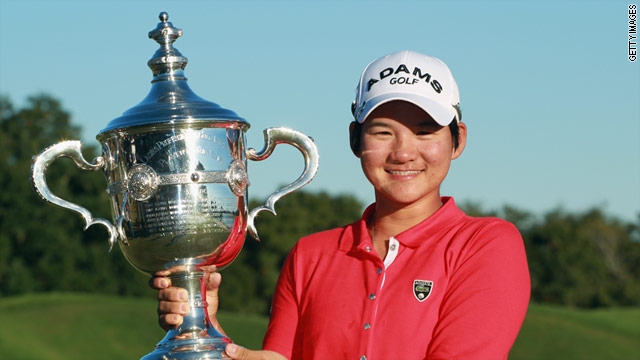 (CNN) -- Taiwan's Yani Tseng was crowned LPGA Rolex Player of the Year after a nervous wait at the season-ending Tour Championship in Florida.

The 21-year-old Tseng has won two of the LPGA's four major championships in 2010, and arrived in Orlando with a clear lead at the top of the Player of the Year points list.

But after shooting a one-over-par 71 in her final round on Sunday, Tseng could only watch on as Christie Kerr of the United States and South Korea's Na Yeon Choi chased a win that would see them overtake Tseng in the standings.

However, Kerr and Choi were both eclipsed by Sweden's Maria Hjorth, who secured her first victory since becoming a mother last year.

I never thought I would be holding this trophy. I've been working so hard to chase this
--Yani Tseng
RELATED TOPICS

Hjorth's win ensured Tseng's 21st-place finish was enough to secure her maiden player of the year title -- capping a superb season in which she won three tournaments, including the Kraft Nabisco Championship and the Ricoh British Women's Open.

The 2008 Rookie of the Year has achieved eight top-10 finishes in 20 tournaments this season and earned over $1.5million in prize money.

"I never thought I would be holding this trophy," Tseng told reporters. "I've been working so hard to chase this."

Kerr finished runner-up to Tseng with Choi third -- but Choi did celebrate topping the LPGA money list, having banked $1,871,166 from 23 tournaments.

The Rolex Player of the Year standings are calculated based on points awarded for top-10 finishes in LPGA Tour events -- with double points on offer at the season-ending LPGA Tour Championship.

Tseng's success ends a streak of four successive titles for Mexico's now-retired Lorena Ochoa, while Korea's Jiyai Shin will finish the year atop the world rankings.