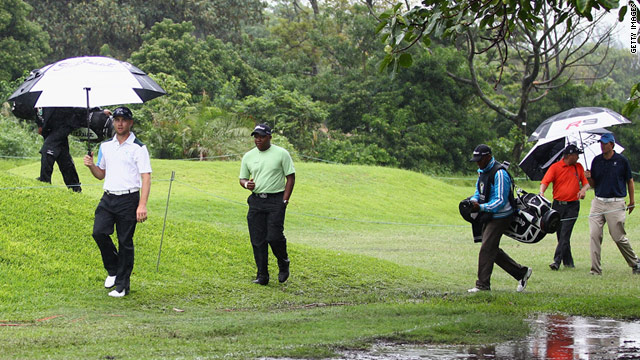 (CNN) -- Heavy rain brought a premature end to the opening round of the 100th South African Open in Durban.

Only half of the field were able to tee off at the Durban Country Club as the inclement weather brought play to an end before 9am local time.

Two-time U.S. Open champion Retief Goosen was one of five players tied for the lead on two-under-par when officials decided to give way to persistent rain.

In among a group of 12 players on one-under was Open Championship winner Louis Oosthuizen, who completed six holes, and former European Ryder Cup star David Howell.

Defending champion Richie Ramsay, from Scotland, was on one-over while South African legend Ernie Els didn't even make it off the first tee.

Play was finally called off for the day at 14.30pm local time with organizers planning to stage round one on Friday, and round two on Saturday.

Tournament director Gary Todd told the European Tour website: "We've had in excess of three inches of rain, that's a massive amount. Hopefully the wind picks up this evening and it dries up a little bit and it gives the green keeper two hours tomorrow morning.

"The key is to get 36 holes in, which constitutes a tournament. So we'll finish round one on Friday and then start round two on Saturday. It will either be a 36-hole final round with a limited field or a 54-hole tournament with a full cut, 65 and ties."

Todd confirmed that finishing on Monday was unlikely given the proximity to Christmas: "Logistically it's quite tricky for the European guys to find flights this close to Christmas. It's a very busy time and we'll need to weigh up all those options."