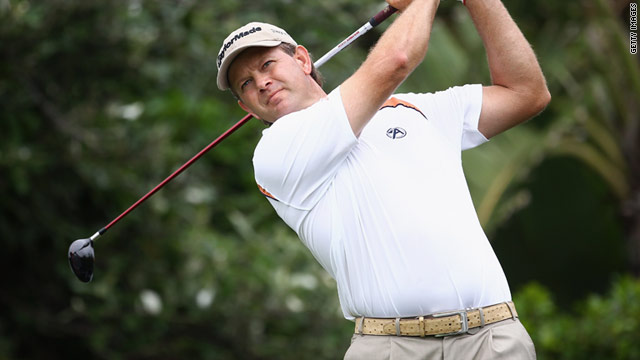 (CNN) -- Retief Goosen and Alex Cejka led the way with eight-under 64s as a clutch of big names jostled for the lead after the first round of the rain-hit South African Open in Durban.

The other big home hope, British Open champion Louis Oosthuizen, is in a 10-strong group tied for 11th on five-under 67, showing improved form after missing the cut last week at the Alfred Dunhill Championship.

Oosthuizen and the other players were unable to finish their first rounds Thursday as the Durban Country Club course was flooded following storms.

"It was a long wait yesterday, so just to get the round going today was good," he told the official European Tour website.

"I think the greens looked a lot better than what we all expected after all the rain."

Two-time U.S. Open champion Goosen set the early clubhouse pace after a round which included two eagles, but a dropped shot in his final hole, the ninth, left him frustrated.

Later starter Cejka of Germany joined Goosen at the head of affairs with an eight-birdie round, finishing with a three on the short par-four 18th.

The 41-year-old Goosen is a twice winner of the South African Open, a joint-sanctioned event for the European and Sunshine Tours, which is celebrating its 100th edition this year.

"Winning two South African Open titles rates right up there with winning two majors," Goosen said ahead of the tournament.

"The South Afican Open is steeped in history. Some of the greatest players of this country have won it. It's a great feeling to see your name on that trophy next to players like Bobby Locke and Gary Player."

Spain's Pablo Martin, who successfully defended his Alfred Dunhill title last week, was seven shots off the lead after a one-under 71.