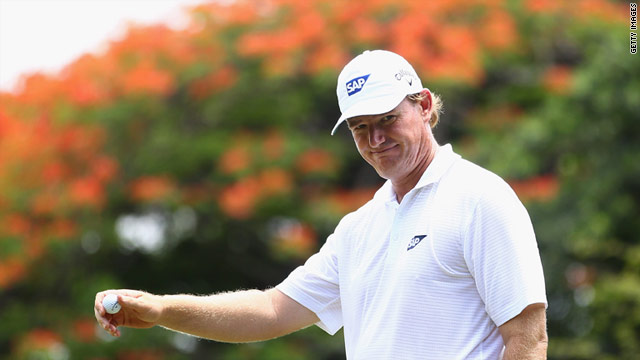 Ernie Els was all smiles as he carded a second straight 65 in Durban.
STORY HIGHLIGHTS

(CNN) -- Ernie Els lived up to his 'Big Easy' nickname with an imperious second-round 65 to lead the South African Open in Durban by two strokes at the halfway stage.

It was the second straight 65 for home hero Els, who is on 14-under 130 as he chases his fifth national open crown.

His nearest challenger is fellow former major winner and fellow South African Retief Goosen, who carded a 68 for 12-under 132.

After rain washed out play on the first day at the Durban Country Club, tournament organizers have scheduled 36 holes for Sunday and the Els and Goosen final pairing is sure to attract a big gallery.

Els is looking forward to the challenge as he bids to add to a pair of earlier wins on the U.S. PGA Tour this year.

I felt really good. I feel like I'm hitting the ball quite nicely and that gives you some confidence on the tees
--Ernie Els
RELATED TOPICS

"It's never easy, but as I said yesterday, I felt really good. Again I feel like I'm hitting the ball quite nicely and that gives you some confidence on the tees," he told the official European Tour website.

"I've been doing the same as yesterday and I have a good game-plan for the golf course. Again, the wind didn't blow so it makes low scoring a little easier."

Els started at the 10th and carded three birdies in his outward nine of 33.

Coming home, he produced four birdies in six holes to complete a flawless round.

Romain Wattel, a 19-year-old French teenager is in third place on 11-under after making the most of the good scoring conditions earlier in the day with a 66.

Sharing fourth on 10-under are another pair of home favorites, Charl Schwartzel and British Open champion Louis Oosthuizen.

Germany's Alex Cejka, who shared the first round lead with Goosen after 64s, could only manage a level-par 72, but is not out of contention with two rounds remaining.