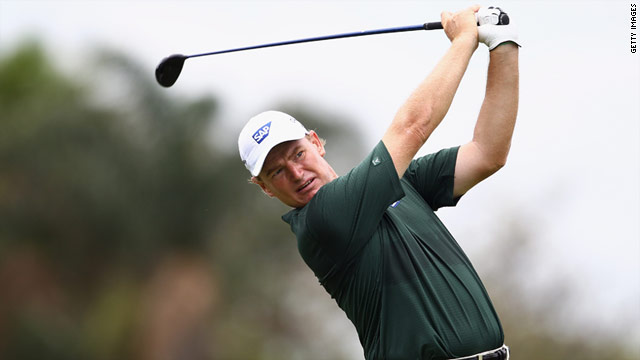 The three-time major champion posted a final round of 66 to finish on 25 under, one stroke ahead of compatriot Retief Goosen.

Goosen, winner of the tournament in 2005, finished strongly closing out his round with three consecutive birdies, but it wasn't enough to overhaul Els who had led since the halfway stage.

Earlier, Els had looked as though he may surrender his lead after bogeying the par-five eighth hole. But back-to-back birdies at the ninth and the 10th, followed by a birdie two at the 12th put the 41-year-old firmly back in control.

An eagle at the par-five 14th hole further cemented Els' dominance and ultimately proved decisive as he claimed the €158,000 ($210,000) first prize in this, the tournament's centenary year.

"It was a wonderful choice to come here," Els told the official European Tour website.

"This really makes the year very good now. Playing under a lot of pressure, with really good players in the field on a great golf course. It was a great championship."

All players who made the halfway cut were required to play their third and fourth rounds on Sunday after rain delays earlier in the tournament had forced organizers to completely revise the playing schedule.

Further rain before play on Sunday also prevented the playing of the par-three fourth hole -- which became waterlogged -- with all players receiving a nominal par for that hole in their final two rounds.