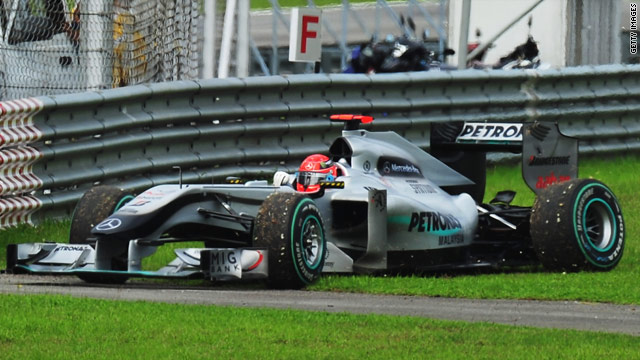 Michael Schumacher was forced to retire early in Malaysia last weekend due to a wheel nut problem.
STORY HIGHLIGHTS

The seven-time world champion has struggled to challenge for a podium place in three races since returning to motorsport's elite class, and has been outperformed by young teammate Nico Rosberg.

But Brawn, whose team won the world title last year after a scintillating start to the campaign, believes that the 41-year-old Schumacher has suffered from problems not within his control.

While Rosberg claimed third place in Malaysia, Schumacher was forced to retire with a wheel nut problem.

Michael is getting more up to speed with every race, although circumstances beyond his control limited his performance
--Ross Brawn
RELATED TOPICS

"Achieving our first podium of the season with Nico was very rewarding in Malaysia at the home race of our title partner Petronas and a timely boost for the team," Brawn told F1's official Web site.

"Michael also had a strong weekend and is getting more up to speed with every race, although circumstances beyond his control limited his race performance in Melbourne and Sepang.

"We hope to continue these signs of improvement in China and it would be particularly good for Michael to be able to have a clean race and show the progress that he has made since the start of the season.

"I am very pleased with the performance of our drivers. We've achieved a reasonable set of results which are in line with the car's current pace, but we have to be realistic and acknowledge that we are not quick enough to compete right at the front at the moment. This is obviously not a situation that we are happy with and we are working as hard as possible to close the gap."

Schumacher is 10th in the drivers' standings after finishing sixth and 10th in the first two races, while fellow German Rosberg is fifth -- four points behind overall leader Felipe Massa of Ferrari.

"The enthusiasm for Mercedes-Benz and the support of the fans is very big in China so we have an attractive race ahead of us in Shanghai next weekend, Schumacher said.

"I am confident that the fans will not leave the race disappointed. We looked quite reasonable in Malaysia at the last race and maybe things will play into our hands again in Shanghai. I am looking forward to the race and fully enjoying the competition again.

"Admittedly the last two races have not been very fortunate for me, but I am very much aware of the reasons for it. I know how things go in F1 and if you look into the detail of the two races, I think everything is still going according to plan. You can only improve step by step, and I am confident that we are achieving this."