Lorenzo on pole for Catalan MotoGP 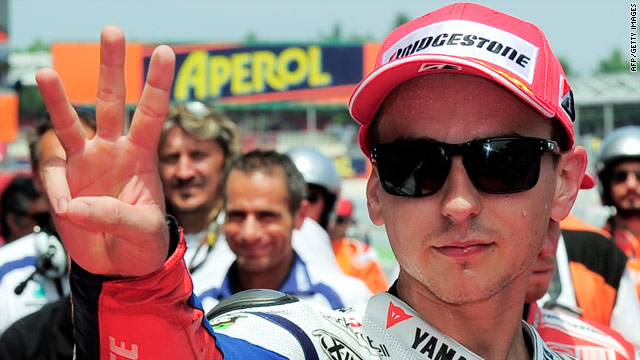 (CNN) -- Spain's Jorge Lorenzo will start Sunday's Catalan MotoGP in pole position after posting a time of one minute 42.046 seconds in his final lap of qualifying.

The 23-year-old Yamaha rider edged out Australia's Casey Stoner on his Ducati, who finished 0.364 seconds behind the 2010 championship leader.

It is the third time in succession Lorenzo has finished in pole and gives him every chance of recording his third successive MotoGP victory after winning the previous two races in Britain and Netherlands.

Pedrosa is joined on the second row of the grid by the American Ben Spies on his Yamaha and Honda's Andrea Dozioso.

Lorenzo currently has a 47-point lead at the top of the MotoGP championship.