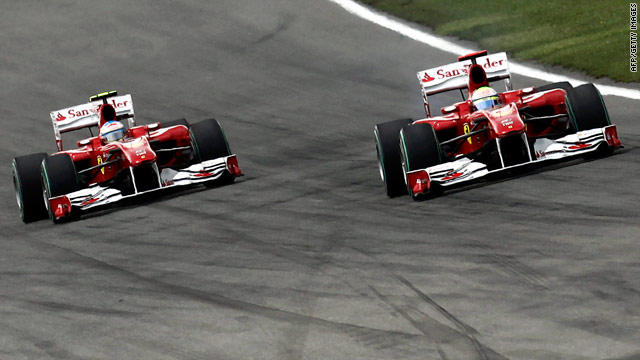 (CNN) -- Ferrari have been fined $100,000 after Fernando Alonso kept his world title hopes alive with a controversial victory in the German Grand Prix on Sunday, though the result was allowed to stand.

The two-time world champion claimed his and Ferrari's first win since the Formula One season-opener in March, but motorsport's ruling body decided that the team had broken rules banning orders to drivers after Felipe Massa let Alonso through late in the race.

The race stewards have also referred the incident to the World Motor Sport Council for further consideration, the official F1 website reported.

Alonso, who started second on the grid behind Sebastian Vettel, recovered after being overtaken at the beginning by Massa, who held off his surging teammate until the 49th lap of 67.

The drivers should have been allowed to race. Massa did the better job. He was in the lead and the regulations are pretty clear
--Red Bull boss Christian Horner
RELATED TOPICS

Then he appeared to let the Spaniard through after being told on his radio that he was the slower of the two drivers.

Massa's race engineer Rob Smedley told him: "Alonso is faster than you. Can you confirm you understand?" Then when Alonso went through, Smedley added: "Good lad -- just stick with it now, sorry."

It appeared to be a tactical decision by the Italian outfit, with Brazilian Massa trailing Alonso by 31 points in the overall standings before the race.

Alonso, who also won in Bahrain, stayed in fifth place but closed to within 34 points of leader Lewis Hamilton with eight races left. He pulled clear to win by 4.1 seconds, twice setting the fastest lap of the race.

Massa held on for second place for his best result of the season since Bahrain, with German Vettel third and teammate Mark Webber sixth as Red Bull failed to follow up the latter's victory last time out at Silverstone.

The race came a year to the day after Massa suffered a horrific head injury after an accident in qualifying for the Hungarian Grand Prix which ruled him out for the rest of the season.

After the race, he refused to criticize his team about the incident but looked visibly disappointed and would not elaborate on how he felt about the events -- while Ferrari denied that rules had been broken.

Was Schumacher's return a big mistake?

Massa told reporters: "I don't need to say anything about that. He passed me. We're doing a good job for the team."

Hamilton, the 2008 world champion, finished fourth to be on 157 points -- extending his lead to 14 over McLaren teammate Jenson Button, who was fifth. The Red Bull drivers were left level on 136 points in third and fourth.

"The drivers should have been allowed to race. Massa did the better job. He was in the lead and the regulations are pretty clear -- team orders are not allowed," he told UK race broadcaster the BBC before the fine was announced.

"I have to say that is the clearest team order I've ever seen. It will be interesting to see what the stewards make of it because for me it was as clear as 2002, which is why the rule was brought in. It's wrong for the sport."

In 2002, Ferrari told Rubens Barrichello to let Michael Schumacher pass in the closing stages of the Austrian Grand Prix.

But Schumacher, who finished ninth on his return to a race he has won four times, said he believed his former team made the right move.

"I understand 100 percent and I would do exactly the same -- what are we here for? We're fighting for the championship," the 41-year-old said.

Renault's Robert Kubica claimed seventh place at Hockenheim, but it was a disappointing day for Mercedes on the German team's home track as Nico Rosberg was eighth ahead of seven-time world champion Schumacher.