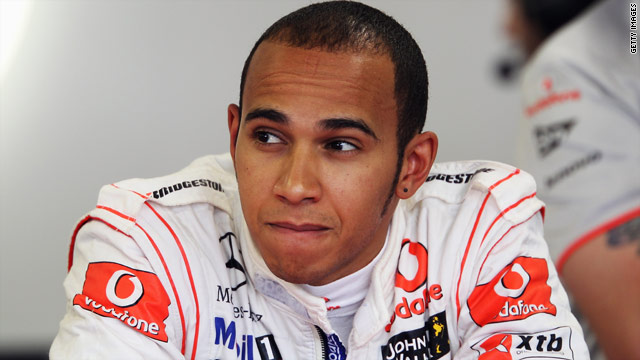 Lewis Hamilton is is predicting an exciting climax to the Formula One season.
STORY HIGHLIGHTS

Lewis Hamilton is predicting a strong finish to the Formula One season for McLaren as the race for the drivers' championship threatens to offer up a thrilling climax.

The 2008 world champion was knocked off the top of the standings by Red Bull's Mark Webber after retiring from the Hungarian Grand Prix -- leaving the way clear for the Australian to take the checkered flag.

Webber now leads Hamilton by four but the top five drivers are separated by just 20 points, meaning Red Bull driver Sebastian Vettel, McLaren's Jenson Button and Fernando Alonso, of Ferrari, are all still in contention going into the mid-season break.

A transmission problem forced Hamilton out in Budapest but he remains confident McLaren will bounce back stronger when the campaign resumes in Belgium at the end of August.

He told the official Formula One website: "In effect, we'll resume the season as if it's the start of the year again - with everything to play for, and none of the top three teams lagging behind on points. That's really exciting!

"I also know we can come back even stronger in the final seven races. We have some very promising developments in the pipeline, and we're making progress in lots of other areas, too.

"We have dug deep before, and I know absolutely that we will dig deep once more. With the championship so closely balanced, this is the perfect time for a break."

I also know we can come back even stronger in the final seven races.
--Lewis Hamilton
RELATED TOPICS

Hamilton admits his first retirement of the season in Hungary left him frustrated but he insists he was still able to draw some positives from his afternoon's work.

He said: "It was a disappointment, yes, but you have to put it behind you. And you should never think too hard about the 'what ifs' or the missed opportunities. It happened, and we move on - it's that simple.

"And, despite it being a difficult race, I can take some positives away from the Hungary weekend - I was able to pass a car on track, and the guys once again pulled off a perfect pit stop, to put me ahead of Felipe (Massa)."

Hamilton led the standings from race eight after completing back-to-back victories in Turkey and Canada but he hasn't won a grand prix since.

Despite his indifferent run of form the 25-year-old maintains he is happy with McLaren's opening to the season.

He added: "We haven't been up there at every race, and we had some fairly difficult weekends at places like Monaco and the Hungaroring, but, on the whole, we've been consistently fast, made very few mistakes and have usually scored the points we've deserved on the Sunday - which hasn't been true of every team.

"I'm pleased with what we've achieved so far, but we know that this is really only the foundation for the championship battle, and that what awaits ahead of us will truly decide the title.

"We know how to win, and we'll be doing everything we possibly can to make sure we're a fully competitive force as soon as the championship restarts at the end of the month. In fact, I can't wait for Spa - I wish it was next week!"