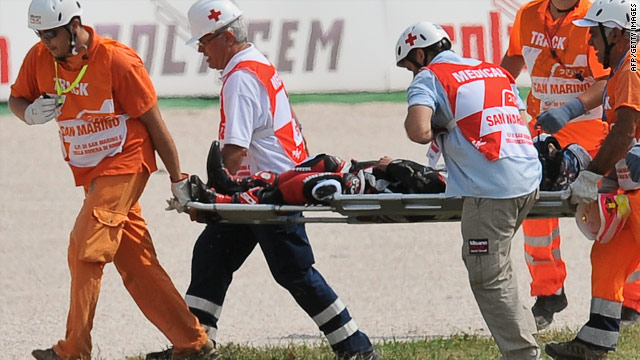 Shoya Tomizawa is strecthered from the track following his tragic accident in San Marino on Sunday.
STORY HIGHLIGHTS
RELATED TOPICS

(CNN) -- MotoGP is in mourning following the tragic death of Japan's teenage rider Shoya Tomizawa after an accident in the San Marino Moto2 Grand Prix on Sunday.

Tomizawa came off his Suter bike on a bend and was struck by the following bikes of Italian Alex de Angelis and Briton Scott Redding -- an impact which saw the 19-year-old thrown down the circuit and into the gravel.

Race organizers confirmed that Tomizawa had died in hospital from serious injuries to his skull, chest and abdomen.

"He was taken to hospital in Riccione for immediate treatment but succumbed to his injuries. All the MotoGP family wants to express its deepest condolences to his family and friends."

Tomizawa's death was the first in the sport since 24-year-old compatriot Daijiro Kato died in April 2003 at the Japanese MotoGP in Suzuka.

Moto2 is the class below MotoGP and the main race followed before news of Tomizawa's death had been confirmed.

Honda rider Dani Pedrosa of Spain claimed victory, his fourth of the season and second in a row, after starting from pole position.

However, there was an understandably subdued podium ceremony when confirmation of Tomizawa's death became known.

"It feels so strange, there is a big hole inside me. I was so happy and then I was told the news and this big hole opened up inside me," the 24-year-old Pedrosa told BBC TV.

Rossi, winner of the race for the past two seasons, was visibly moved to tears, saying: "When it happens like this nothing else really matters."