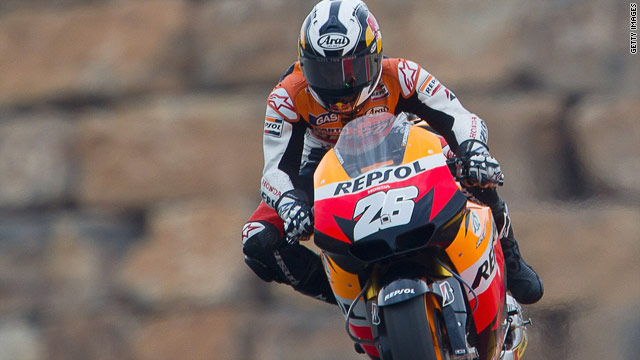 (CNN) -- Spain's Dani Pedrosa was quickest in Friday's free practice session for the Aragon MotoGP in Spain on Sunday.

Pedrosa clocked a time of one minute 50.50 seconds in the morning session before heavy rain meant those going out in the afternoon were unlikely to better his time.

Pedrosa is hoping to secure a third successive MotoGP victory and comes into the race with his future sorted after signing a new two-year contract with Honda this week.

Speaking to the official MotoGP website, Pedrosa said: "In general this has been a good first day of practice for us at a brand new circuit for MotoGP.

"We started well and got into a rhythm quickly, which was important because it makes a big difference going from the one hour practice sessions we're familiar with to 45 minutes."

With six races still remaining this season, Lorenzo holds a 63-point lead over compatriot Pedrosa going into the weekend.