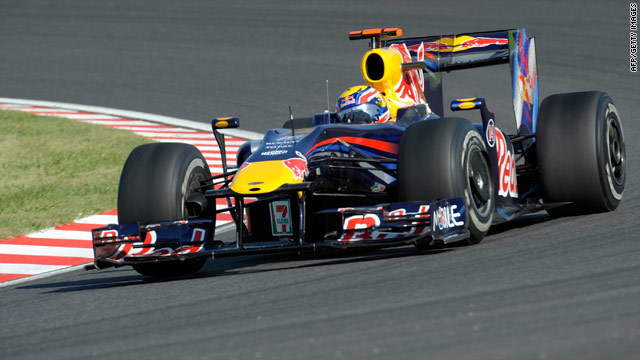 (CNN) -- It's one of Formula One's favorite circuits for drivers, and Suzuka will this weekend host what promises to be an enthralling start of the climax to the 2010 season.

Red Bull's Mark Webber heads the standings by 11 points from Ferrari's two-time world champion Fernando Alonso ahead of Sunday's Japanese Grand Prix, and the Australian is hoping to do better than his 17th placing last year.

"The momentum is currently with Ferrari going into the race, as they have had two victories on the bounce, but the points situation is still very open," Webber told the official F1 website.

"It's nice that I have a little buffer, it's not very big but it's something I would rather have than not. Suzuka is a track that all the drivers love and I'm looking forward to it. I think we will be very competitive; we need to go there and get the maximum out of what we have."

I think the world championship is still completely open. Any of the top five drivers could easily steal the title
--Jenson Button
RELATED TOPICS

Sebastian Vettel won the race from pole position last year, and the fourth-placed German is seeking to cut the 21-point deficit by which he trails his teammate Webber with four races to go.

"Suzuka should suit our car, but we still have to go there and prove it. Last year was very good and I think we should get a good result again," Vettel said.

"There are still a lot of drivers fighting for the title and they are very close to each other. It's tight and a lot of things can still happen. We need to make sure we get the best out of ourselves and then we will see."

McLaren's 2008 world champion Lewis Hamilton trails Webber by 20 points following a disappointing run of results, having lost his lead after failing to finish three of the past four races.

"Suzuka is very much unfinished business for me. I raced the best I could last year, but our car just wasn't fast enough," the English driver said.

"This year, I'm holding nothing back. I need a strong result to get my title hopes back on track, and that will be my complete focus from the moment I first sit in the cockpit on Friday morning. Now is not the time to hold back -- now is the time to fight.

"It's a real driver's circuit -- you need to be committed and precise to do well there, and there's no room for error either: no Tarmac run-off, and all the barriers are pretty close, so any mistake is going to hurt your chances big-time."

Hamilton's compatriot and teammate Jenson Button still holds hope of retaining the world title that he won with Brawn last year, despite being fifth overall this season 25 points behind Webber.

"I love the whole Suzuka experience -- the fact that it's a real trek to reach from Europe, the amusement park that you walk through to get to the paddock, the incredibly loyal and friendly Japanese fans who cheer me on all weekend, and the whole atmosphere, which is invariably extremely tense and frantic, because the race always plays such a decisive role in the outcome of world championships," Button said.

"I think the world championship is still completely open. Any of the top five drivers could easily steal the title. It might seem a disadvantage to be behind in the points standings, but, make no mistake, I know I can win this championship. I'm still as determined as ever to keep the number one on my car for 2011."

Japanese driver Kamui Kobayashi, who is 12th overall for Sauber, is looking forward to making his F1 race debut at the circuit in his first full season in motorsport's elite class.

"I was 17 years old the last time I raced in Japan. Of course I know the circuit quite well after having driven there last year for Toyota in free practice before the Grand Prix," the 24-year-old said.

"It is very exciting for me to be going there, and I know there will be a lot of supporters. There is a special area for my fans, and the 2,000 tickets were sold out quickly. Beside the race preparation, the food and the Japanese spa treatments are something to look forward to."