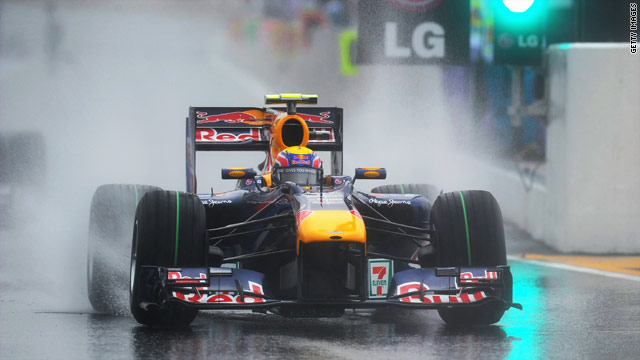 It will now take place ahead of Sunday's race, weather permitting, the first time this has happened in Formula One since the corresponding race at the same track in 2004 which was hit by a typhoon.

Lewis Hamilton's fading title challenge also received a further setback after he was given a five-place grid penalty for changing his gearbox in the third free practice session on Saturday, which was badly hit by the rain with the McLaren star only completing three laps.

Hamilton, who crashed heavily in practice on Friday, described conditions as "crazy" as he tried to make up for lost time.

"It was unbelievable, some of the worst conditions I've ever experienced in Formula One," Hamilton told the official Formula One website.

It was unbelievable, some of the worst conditions I've ever experienced in Formula One
--Lewis Hamilton
RELATED TOPICS

The 2008 champion has lost his lead in this year's championship after failing to finish three of his last four races.

With water causing the cars to aquaplane on the track, Red Bull Racing's Sebastian Vettel, who was fastest in Friday practice, fully backed the decision of the stewards.

"I know it is not an easy decision to take, but in those conditions we have no control of our cars," Vettel said.

"I think it was the right decision. There was no chance for us -- we would just be passengers, rather than controlling, and being able to push to our limits and to the limits of the car."

Vettel's teammate Mark Webber leads the championship race from Ferrari's Fernando Alonso and Hamilton, but the top five including the Frenchman and reigning world champion Jenson Button are still in the running.