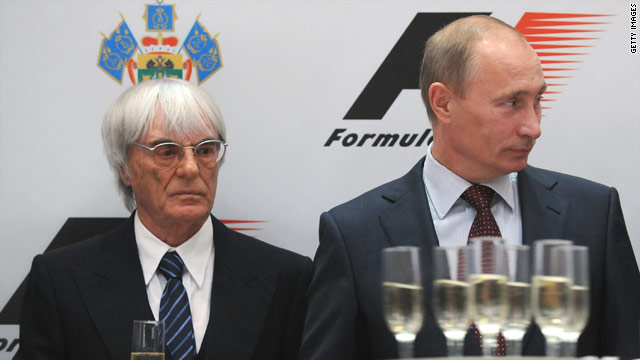 Vladimir Putin, right, and Bernie Ecclestone signed a deal to bring Formula One to Russia on Thursday.
STORY HIGHLIGHTS

(CNN) -- Russia will host a Formula One race for the first time in 2014, its Prime Minister Vladimir Putin announced on Thursday.

A seven-year deal has been agreed to host the race at the Black Sea resort of Sochi, running through to the 2020 season. The city will also host the 2014 Winter Olympics.

"We have reached an agreement with the principal owner of Formula One that Sochi would host the Russian Grand Prix from 2014 to 2020," former President Putin told Russian business leaders, as quoted by state news agency RIA Novosti.

"I am very happy that Formula One will take place in Russia," he told the UK Press Association.

"I hope that Formula One will contribute to the development of Sochi which can be seen here."

Russian motorsport commentator Alexei Popov has hailed hosting a grand prix as one of the biggest events in sport.

"Such an ambitious project became possible only due to the political will of high-profile officials," he told business newspaper Vedomosti.

"After the Olympic Games and the World Cup, this is the most spectacular sports event."

The sport has been keen to expand into new regions in recent years, with Korea making its F1 debut later this month and India being added to the racing calendar for the 2011 season.

The new race could lead to the creation of Russia's first F1 team, according to Igor Yermilin of the Russian Motor Racing Federation.

"The signing of the agreement to stage a Grand Prix in Sochi will help put a Russian team in F1," he told RIA Novosti.

Vitaly Petrov this year became the first Russian to drive in F1 after securing a race seat with the Renault team.

The 26-year-old, who signed a one-year deal with the option of two more, is 13th in the drivers' standings on 19 points -- 95 behind Polish teammate Robert Kubica.