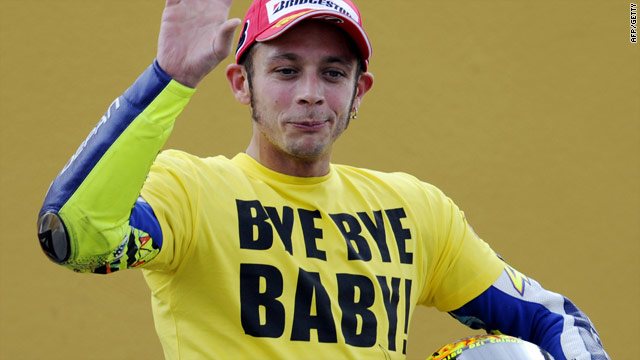 (CNN) -- New world champion Jorge Lorenzo rounded off the MotoGP season with victory in the Valencia Grand Prix to break the record for points scored in a season.

The Spaniard won his ninth race of a dominant year to take his tally to 383 points, breaking the mark set by Yamaha teammate Valentino Rossi of 373.

Rossi finished third in his final race for Yamaha before riding for Ducati next seaon. Casey Stoner of Australia took second after leading until eight laps to go.

It was an emotional farewell to the Japanese works team for Rossi, who went into 2010 as reigning champion but saw his title chances end when he broke his leg at Mugello in mid-season.

"It has been a great experience and I have enjoyed it a lot," said 31-year-old Rossi.

"I wanted to do a good race for Yamaha on my farewell but I didn't have any power to stop the bike so I had to slow down," he told the official MotoGP website.

Stoner, who is leaving Ducati for Honda with the arrival of Rossi, had won three of the last four races and made much of the early running from pole.

But Lorenzo seized his chance to take a lead he never relinquished, much to the delight of the home crowd.

"Today was one of the best races of my life," he said.

American Ben Spies took fourth behind for the Monster Yamaha Tech 3 team, while Dani Pedrosa sealed the runners-up spot in the championship with seventh place for Honda.