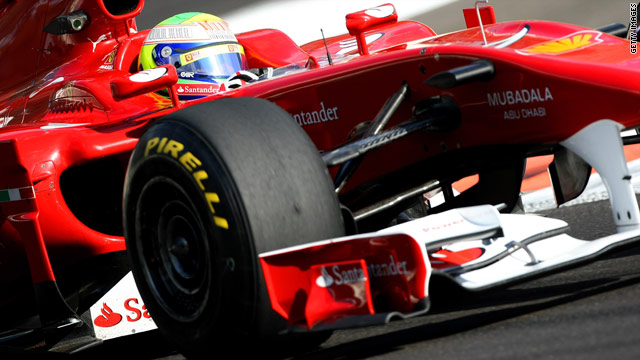 Formula One world champion Sebastian Vettel declared himself impressed after road testing the new Pirelli tires that are to be used for the 2011 season.

The Red Bull driver was back at the Abu Dhabi circuit where he clinched his first ever drivers' championship crown last weekend, after edging out teammate Mark Webber and Ferrari's Fernando Alonso.

The Yas Marina track played host to all 12 Formula One teams as they began a two-day tire test on the Pirelli rubbers, set to replace Bridgestone from next year. A total of eight sets of tires are available to teams during testing.

Ferrari's Felipe Massa, who finished a disappointing sixth in the drivers' standings, was quickest in the unofficial timings on Friday, with Vettel in second.

I think the tires behaved well, better than expected given the short amount of time Pirelli have had
--Sebastian Vettel, Formula One world champion
RELATED TOPICS

"I think the tires behaved well, better than expected given the short amount of time Pirelli have had and they've done a good job," Vettel told the official Formula One website.

"Pirelli are obviously in the middle of their development and what we used today is not what we will race with, but it was a good start."

Massa was three-tenths of a second faster than Vettel, and completed 94 laps of the circuit using two different types of tires.

"It was a positive start to begin to understand the behavior of the Pirelli tires. I felt at ease right from the start and there were no unpleasant surprises," Massa added.

"We acquired a lot of data which will be useful for the Italian company to develop the tires still further for the start of the 2011 season.

"On the harder tires, there were some difficulties over a long run while the softs worked well both on the very first lap and also after they had done a larger number of laps."

"We have to hand it to Pirelli, the tyres are already on a good level and we feel it was a very positive day," said BMW Sauber technical director James Key.

"We feel we learned a lot about the way the tyres are behaving and responding to different set-up changes."