Team Lotus stand by Trulli and Kovalainen for 2011 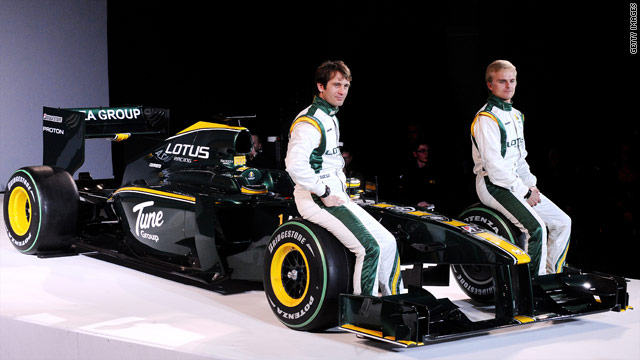 Jarno Trulli and Heikki Kovalainen will be racing for Lotus again in the 2011 season.
STORY HIGHLIGHTS
RELATED TOPICS

(CNN) -- Jarno Trulli and Heikki Kovalainen have kept their places in the rebranded Team Lotus line-up for the 2011 Formula One season.

Italian Trulli and Finn Kovalainen were the line-up for Lotus Racing last season as a team bearing the name of the famous marque returned to the world championship for the first time since 1994.

The 36-year-old Trulli is preparing for his 15th season in F1, racing for six different teams, winning his only grand prix in Monaco in 2004 with Renault.

Former McLaren star Kovalainen claimed the new team's best result in 2011 when he finished 12th in Japan, but suffered a heavy crash in Sunday's Race of Champions.

He was knocked unconscious and he wrote on his Twitter blog: "I've been put to bed-rest at home as a precaution, heavy concussion, further tests in the next few days as head took a big hit."

The Team Lotus, who are sponsored by CNN, line-up was confirmed as the sports's governing body, the FIA, released the provisional drivers' list for the 2011 season.

Force India, Toro Rosso, Hispania and the renamed Marussia Virgin Racing have yet to confirm their driver line-ups.

Williams announced Tuesday that Venezuelan Pastor Maldonado has been drafted in to drive alongside Rubens Barrichello, although he is not included on the initial list.

He would replace German Nico Hulkenberg, whose contract was not renewed.

Renault have named only Robert Kubica after Russian Vitaly Petrov's seat was placed into question after an inconsistent first season.

The leading teams of Red Bull, McLaren and Ferrari have, as expected, unchanged line-ups.