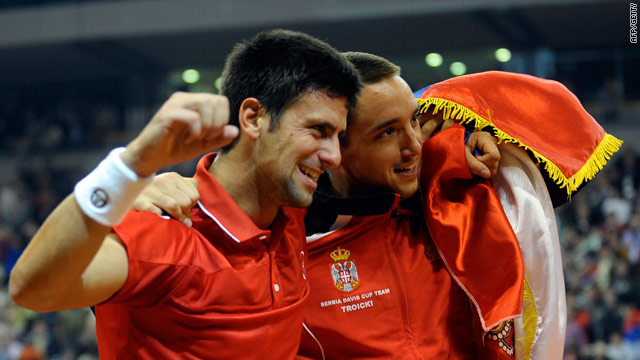 Serbia led the United States 2-1 overnight in Belgrade with Djokovic favored to beat the giant Isner to clinch the tie, but he was given an almighty scare before winning 7-5 3-6 6-3 6-7 6-4.

They will now play Croatia at home on July 9-11 in the quarterfinals of the premier team event in tennis after their first-ever victory in the World Group.

Djjokovic, urged on by a partisan home crowd, looked headed for a routine win as he took the opening set, but he was broken twice in the second as Isner leveled.

Djokovic returned the compliment in the third set to lead two sets to one, but he could not force home the advantage and he lost a fourth set tiebreak 8-6 as Isner set up a decider.

A single break in the first game gave Djokovic a crucial advantage, but his American opponent proceeded to save six match points before finally netting a forehand, the home hero sinking to his knees after an exhausting ordeal.

The defeat means Patrick McEnroe's U.S. team face a relegation playoff later this year to maintain their record of playing in the World Group every year.

It'll be like a final, it's the kind of thing you dream about
--Guy Forget on facing Spain

In other ties, defending champions Spain shrugged off the absence of the injured Rafael Nadal to beat Switzerland 4-1 to set-up a quarterfinal clash with France.

Russia edged out India 3-2 and will face Argentina who defeated Sweden 3-2 in Stockholm.

Returning from injury David Nalbandian was Argentina's match winner in Stockholm as he beat Andreas Vinciguerra 7-5 6-3 4-6 6-4 in the deciding rubber after Swedish number one Robin Soderling had drawn them level with a straight sets win over Leonardo Mayer.

France's home clash with Spain is already whetting the appetite of tennis fans.

"It'll be like a final, it's the kind of thing you dream about," France captain Guy Forget told the official Davis Cup Web site www.daviscup.com.