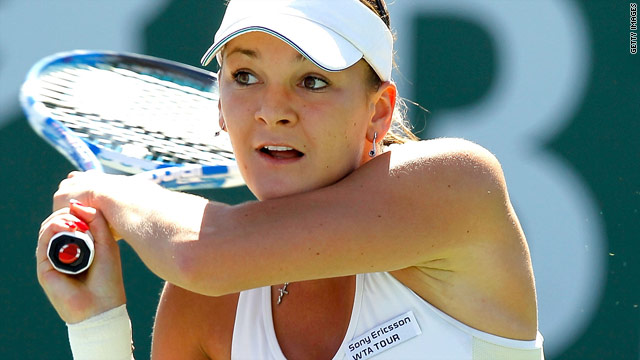 (CNN) -- World No. 8 Agnieszka Radwanska has claimed the first semifinal place at the BNP Paribas Open in Indian Wells after defeating Elena Dementieva on Wednesday.

The Pole will next play second seed Caroline Wozniacki, her close friend, after winning 6-4 6-3 against Dementieva.

The fourth-seeded Dementieva, the runner-up in 2006, had been seeking to reach her fourth final on the WTA Tour this year.

But Radwanska, who turned 21 earlier this month, reached the last four in the Californian event for the first time following two successive quarterfinal defeats.

"This year it's already my second semifinal, so I think I'm doing good," Radwanska told AFP. "I will just keep going, working hard. Here, especially in the big tournaments, you have good matches since the third round.

I was so slow. I was reaching for the ball instead of going forward and attacking her second serve
--Elena Dementieva
RELATED TOPICS

"So it's great that I'm playing good and beating the top players in two sets."

Dementieva was disappointed after failing in her bid to add to titles won in Sydney and Paris this season.

"I was so slow. I was reaching for the ball instead of going forward and attacking her second serve," the Russian told AFP.

"She slowed down the game a lot and mixed it up a lot. You have to be very aggressive. You have to step forward. You have to create something. I was way too slow."

It was the first time the 19-year-old had beaten 18th seed Zheng in four meetings, and also gave her a first semifinal berth at Indian Wells.

"It was a long match. It was really tough," Wozniacki told the tournament's official Web site. "She played really well and got a lot of balls back that I thought I had won already. I'm really pleased about my game today."

Wozniacki said she would have to perform well to beat Radwanska, who she last faced in 2008.

"She's a good player. She's getting a lot of balls back. She's thinking. She's smart on the court," Wozniacki said.

"But she's a good friend. Tomorrow I think we're just going to relax, have fun, and then we have to see what's gonna happen the day after."