New No. 2 Wozniacki to take on Jankovic in Indian Wells final 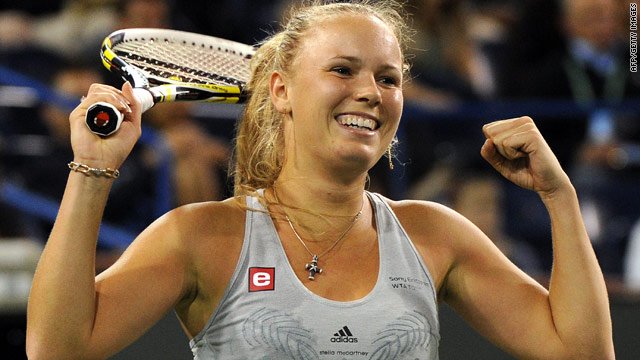 (CNN) -- Caroline Wozniacki has earned a career-high world No. 2 tennis ranking after winning through to the final of the BNP Paribas Open at Indian Wells in California.

The second-seeded Dane will move above the injured Dinara Safina and close the gap on No. 1 Serena Williams when the latest standings are released on Monday.

The 19-year-old will play former world No. 1 Jelena Jankovic in the final of the Californian outdoor hardcourt tournament after defeating close friend Agnieszka Radwanska 6-2 6-3 on Friday night.

Wozniacki, who reached the U.S. Open final last year before losing to comeback queen Kim Clijsters, will be seeking her seventh title on the WTA Tour.

Agnieszka is a great fighter. She doesn't give up. I knew that I had to fight till the last point to win this match
--Caroline Wozniacki
RELATED TOPICS

She dominated against fifth seed Radwanska, winning the first five games of the opening set and then taking the final four points off the Pole's serve in the match-clinching game.

"Agnieszka is a great fighter. She doesn't give up. I knew that I had to fight till the last point to win this match.

The Serbian, now ranked ninth, has reached the final at Indian Wells for the first time in nine appearances, and will be looking to emulate compatriots Ana Ivanovic and Novak Djokovic by clinching the title there.

"I thought the key to today's match was my return," Jankovic said. "Samantha has an unbelievable serve, one of the best serves in women's game, and I was able to return a lot of her first serves.

"I was putting a lot of pressure on her second serve. So I think that was the key, because I was able to break her quite a few times. And then it made everything easier for me."

Stosur, who knocked out defending champion in the fourth round, will break into the top-10 following her exploits this week.

"Today was a bit disappointing, but it's still my best result in a tournament like this. I think there's a lot to build on," she said.