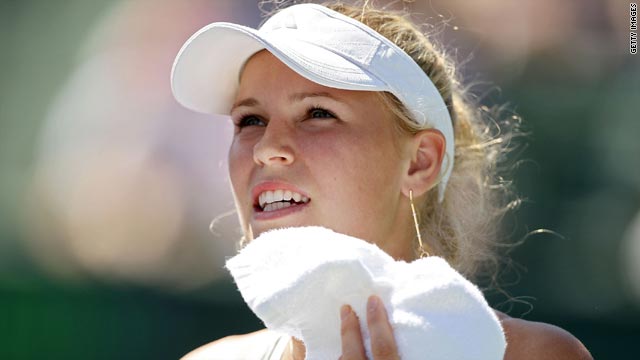 (CNN) -- World No. 2 Caroline Wozniacki hopes to be fit for this year's second grand slam tournament, the French Open, despite suffering an ankle injury in an American event.

The Dane had to retire hurt during her semifinal match against Russian seventh seed Vera Zvonareva in Charleston, South Carolina, on Saturday while trailing 5-2 in the first set.

The top seed slipped on the green clay in the sixth game and rolled her ankle, meaning Zvonareva went through to Sunday's final where she will face Australian Samantha Stosur.

Wozniacki, who won the WTA Tour tournament in Ponte Vedra Beach last weekend, told reporters that she hoped to be able to play at Roland Garros when play begins on May 24.

"I certainly hope so. As it looks right now, it's not too bad," said the 19-year-old, who will have a scan on the injury.

"I was surprised that I could stand on my leg, which was very positive, actually. "But as soon as I was moving to the sides, it was impossible, so I couldn't play."

Fourth seed Stosur reached the final of the Family Circle Cup with a 6-3 7-6 (7-2) victory against No. 8 Daniela Hantuchova of Slovakia.