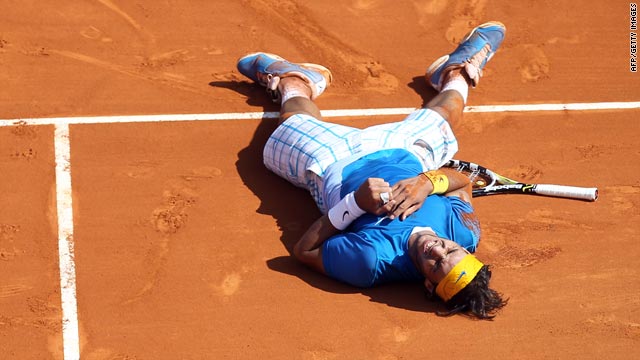 "King of Clay" Rafael Nadal was overcome with emotion after continuing his winning run in Monte Carlo.
STORY HIGHLIGHTS

(CNN) -- Rafael Nadal fired an ominous warning that he is ready to reclaim his French Open crown from Roger Federer after picking up a record-equaling sixth consecutive Monte Carlo Masters title on Sunday.

The world No. 3 earned his first tournament success in 11 months as he routed fellow Spaniard Fernando Verdasco 6-0 6-1 to complete a triumphant return to his favored clay surface.

The 23-year-old has had a difficult past year after his shock defeat at the French Open to eventual losing finalist Robin Soderling, with Federer earning his first win at Roland Garros.

Nadal needed surgery on his knees after that setback, and his hiatus allowed Federer to take both his Wimbledon title and the No. 1 ranking.

I love this tournament. To win here another time is a dream for me. The atmosphere here is unbelievable
--Rafael Nadal
RELATED TOPICS

The Mallorcan reached the semifinals in his past two tournaments on hardcourts surfaces in the United States, and blitzed his opponents in Monaco as three times he dropped only one game in a match.

"For me, it is very emotional," Nadal, who equaled the 106-year-old record of six Monte Carlo titles held by Englishman Reggie Doherty, told the ATP Tour Web site.

"It is probably my favorite tournament. I love this tournament. To win here another time is a dream for me. The atmosphere here is unbelievable. I feel like I'm at home.

"No one match during seven years have I felt the crowd against me. I just can say thank you very much everybody."

Nadal's only defeat at the tournament was against Guillermo Coria as a 16-year-old in 2003, and world No. 12 Verdasco never looked like registering his first win over his compatriot in 10 encounters.

"He had an unbelievable day and he played really good. I also didn't maybe have a good day, because I was trying to force and made more mistakes than unusual," said Verdasco, who was playing in his first Masters 1000 tournament final after thrashing world No. 2 Novak Djokovic 6-2 6-2 on Saturday.

Nadal, by comparison, drew level with Federer on 16 Masters titles, behind only the 18 won by American Andre Agassi.

He has now won 54 successive matches on clay in the month of April, with six titles in Monte Carlo and five in Barcelona in that time.

Federer, who has not played since the Miami Masters last month, is set to make his return to the circuit at the Rome clay event starting on April 25.

Nadal will be top seed at the Barcelona Open starting next week, with the draw also including Sweden's Soderling, Verdasco, Jo-Wilfried Tsonga of France and Monte Carlo semifinalist David Ferrer.

The French Open, the second grand slam tournament of the tennis season, begins in Paris on May 24.

The fourth seed, ranked 11th in the world, drubbed Russian No. 7 Vera Zvonareva 6-0 6-3 in the final of the Family Circle Cup on green clay in Charleston, South Carolina.

Zvonareva had made it into the title match after world No. 2 Caroline Wozniacki retired with an ankle injury during their semifinal on Saturday.