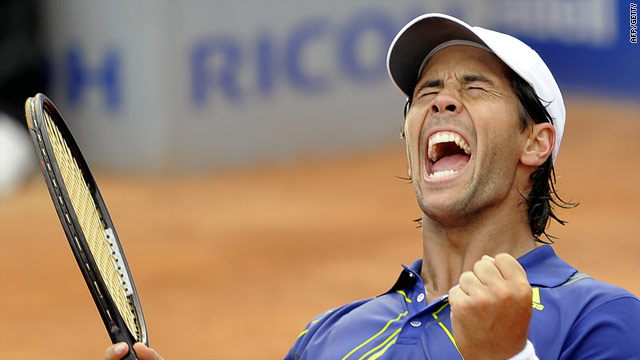 Verdasco shows his delight as he claims his second ATP title of the season.
STORY HIGHLIGHTS

(CNN) -- Fernando Verdasco beat Swede Robin Soderling 6-3 4-6 6-3 to claim the Barcelona Open crown on Sunday and ensure a Spanish winner of the clay court tournament for the eighth successive year.

The fifth seed Verdasco might have been demoralized after his straight sets rout at the hands of Rafael Nadal in the Monte Carlo Masters final last weekend, but showed his fighting qualities against Soderling.

With defending champion Nadal opting not to defend his title at his own club, Verdasco took advantage to add to his San Jose title success earlier this year.

He follows compatriots Carlos Moya (2003), Tommy Robredo (2004) and Nadal for the last five years in keeping the trophy on home soil.

I'm very excited and happy to win this tournament. I wasn't originally going to play this week, but I got a wild card and here I am
--Fernando Verdasco
RELATED TOPICS

"I'm very excited and happy to win this tournament. I wasn't originally going to play this week, but I got a wild card and here I am," he told the ATP Tour's official Web site.

"I've been training here since the age of 15. Watching the Barcelona Open for me has always been a very special tournament."

Verdasco broke the big-hitting Soderling in consecutive service games as he took the opening set.

Soderling, who beat Nadal en route to last year's French Open final, showed his ability on clay by winning the second to set up a decider.

But the home hope broke Soderling again in the fourth game of the third set and served out to clinch the title.

Nevertheless, it was a promising first appearance of the season on clay for Soderling as he builds up to the French Open at Roland Garros from May 23 where Roger Federer defends the crown.